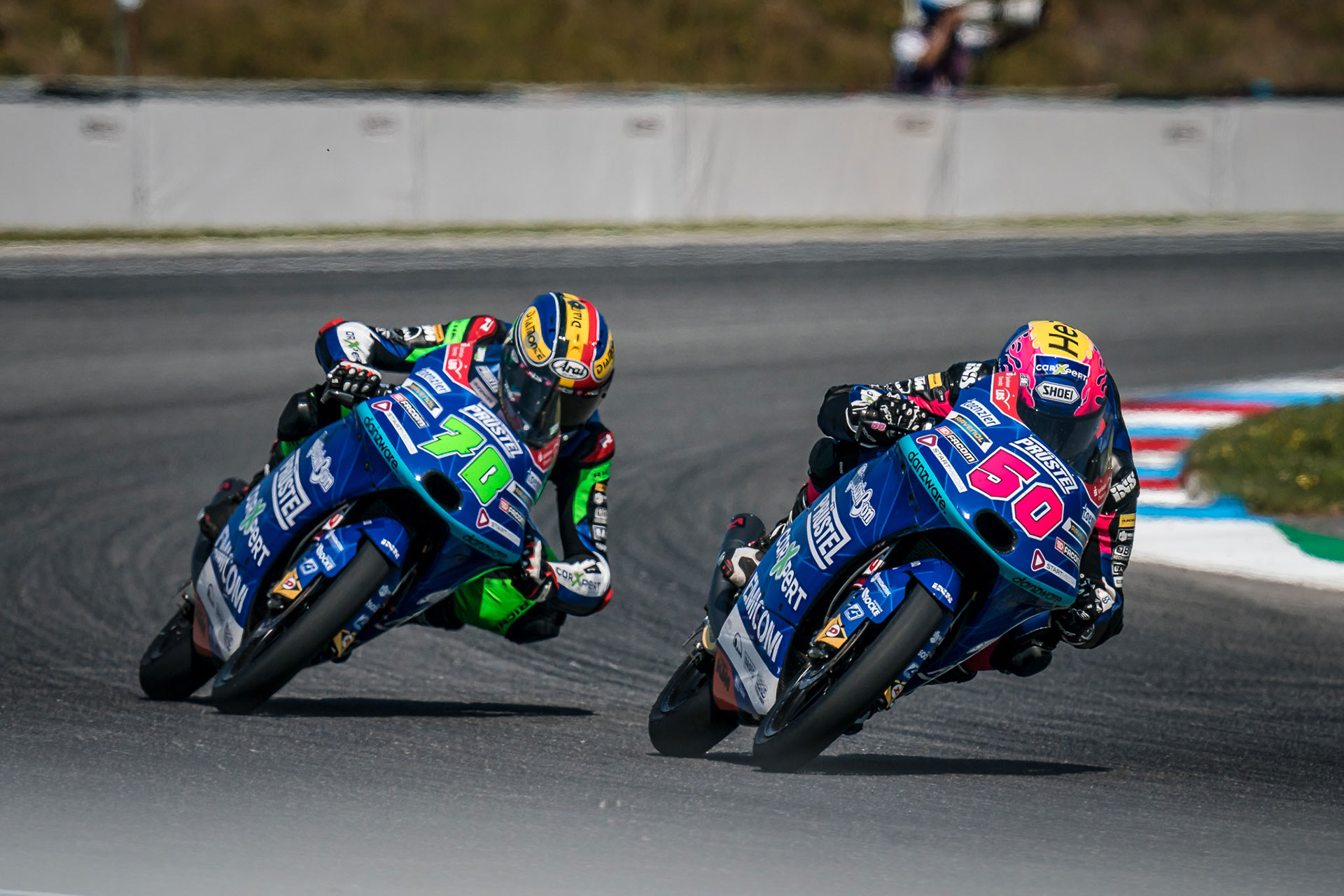 A weekend of ups and downs for Carxpert PrüstelGP in Brno

After a very short summer break, Moto3 World Championship got back in action for the Monster Energy Grand Prix of Ceské Republiky, the first of three race weekends in a row. The Czech circuit, usually one of the most crowded GP of the season, this time took place behind closed door, as it happened in Jerez.

Jason Dupasquier and Barry Baltus came to the track fully motivated after finishing in the top-20 at Jerez GP, both not far from the points. The Carxpert PrüstelGP duo made the real debut on the circuit on Friday morning for FP1. The Swiss Jason found immediately a good feeling with his bike reaching a 2´09 already in the first session of the weekend and keeping a good pace for all the free practice.

Barry Baltus instead needed a bit more time to adapt on the track, but managed to improve by 2 seconds in only three sessions.

The qualifying session of Saturday had ups and downs for PrüstelGP. Barry Baltus missed Q2 for less than 2 tenth, but his performance assured him a solid 21st position of the starting grid. Jason, couldn´t find a fast lap time in Q1 and was forced to start Sunday´s race from the 29th position.

After the promising warm up, both riders were expecting a comeback race. Unfortunately, after keeping the contact with the big front group for the first few laps, they were no more able to fight for the points and keep the pace shown during the the weekend. Barry and Jason finished the race respectively 21st and 23rd.

Carxpert PrüstelGP will get on track already next Friday for the myWorld Motorrad Grand Prix von Österreich at Red Bull Ring (Spielberg).

It was not a negative weekend, we had good but also bad moments. It was my first time on this track and FP1 was a bit difficult because I was riding alone most of the time. But then on Saturday we made a big step forward in FP3 and I felt much faster. I did a good job also in Q1, we were fast starting from the beginning and I missed Q2 just by two tenth and I could start 21st on the grid. In the warm up the feeling was good, I did immediately 2´09 and only 1,3 second from the first was not bad.  I had a difficult start of the race, I lost many position and unfortunately due to a mistake, I couldn´t keep the pace of group. The positive thing is,  I know what to improve. We keep focused for Austria, it will be difficult but I will do my best. I want to thank my team and all my supporters. Can´t wait to be back on my bike in Austria!

FP1 was my first time ever on the track so I had to get familiar with it and its lines. Anyway the goal was to give my best starting from the beginning of the weekend so I pushed at maximum already starting from FP1, and I was able to reach a good laptime. The feeling was immediately good, and the approach was the same also for FP2 and FP3. Unfortunately I couldn´t concretize it in Q1 as I made a mistake in strategy. In the race I had a good start and I felt ready to fight in the group, but already in the first lap I was not comfortable with the front and I made some little mistake in braking and I couldn´t stay with the group. Anyway I stay positive because I understood what I did wrong. I learn a lot this weekend and I am ready to get back on track in Austria.

It was a weekend of mixed emotions. The free practice were very good. Especially Jason could show that he is very fast and can close the gap to the front. Unfortunately we couldn’t convert the good performance of the practice sessions into a good starting position in qualifying. We have to work on that, because it also made the race much more difficult. Jason and Barry could not keep up with the group and then had a hard time.