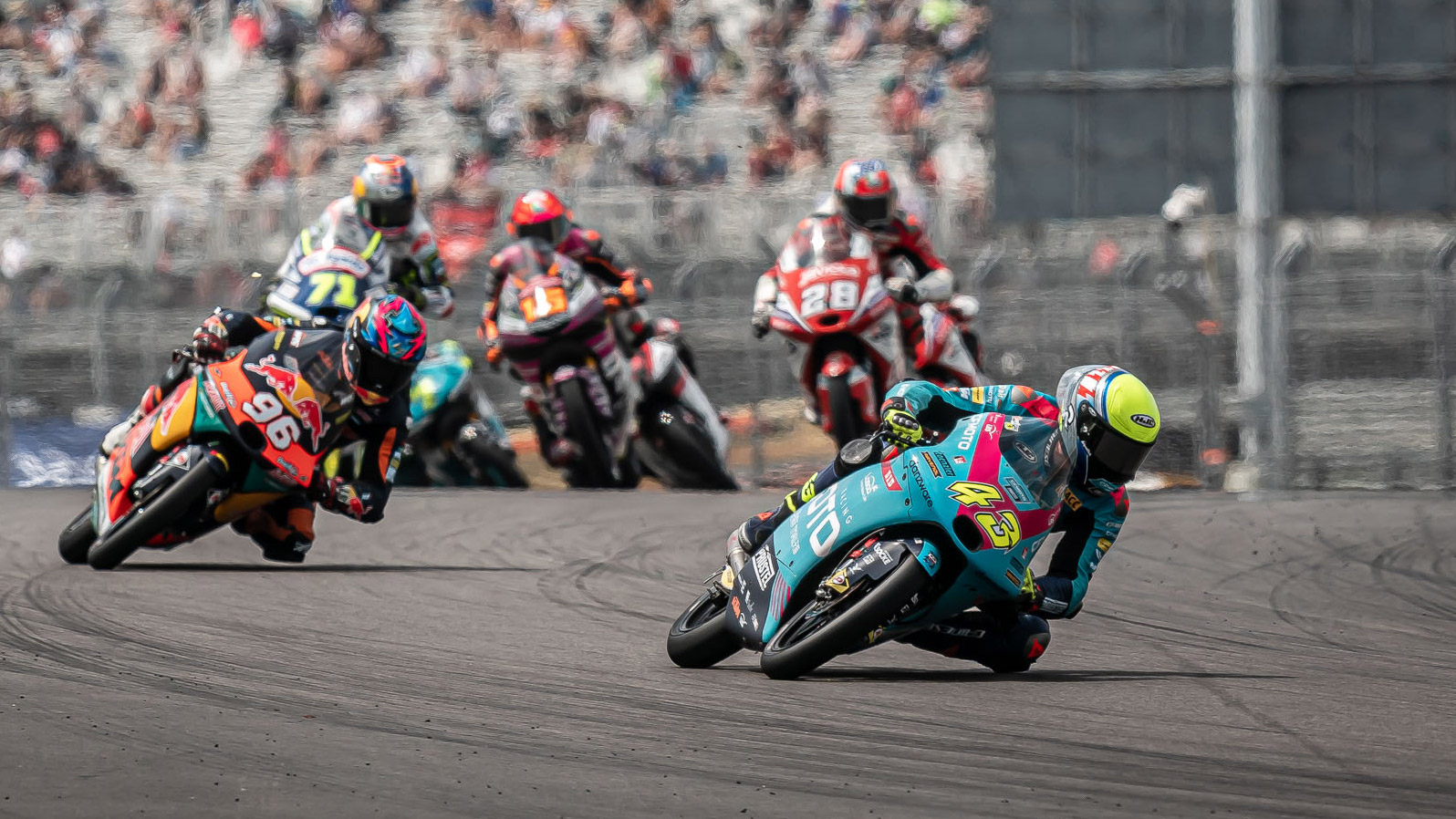 After a stormy rodeo ride Xavier Artigas avoids a crash in last lap and finishes in 6th place, followed by Carlos Tatay in 8th

MotoGP™ continued its wide international trek by travelling from south to north America for a second consecutive race weekend. The brilliant, fast and challenging Circuit of the Americas was the host venue for the ninth time and since its inauguration in 2013.

One of the longest and most undulating courses on the calendar, the 5.5km distance mixes demanding switchback turns, cambered bends, tight corners (of the 20 in total) and a mammoth straight all within a vast sports and entertainment complex. The long lap-time requires a delicate set-up balance of flow and potent stopping power for the motorcycles and the stiff breeze and high heat added to the difficulty of the conditions across the weekend.

CFMOTO Racing PruestelGP had an eventful practice and qualifying schedule. Xavier Artigas had to negotiate Q1 and constructed a lap-time to move directly into Q2 where his next effort allowed him to place his CFMOTO bike into 3rd position and the final slot on the front row of the grid. It was a remarkable turnaround by the Spaniard who was just two-tenths of a second from Pole Position. Carlos Tatay was slightly further back in 14th.

The American schedule saw the agenda altered for Sunday and instead of opening the Grand Prix timetable Moto3™ was bumped after the MotoGP showpiece. CFMOTO Racing PruestelGP and their rivals had to be patient and also had to deal with afternoon temperatures.

But that did nothing to dampen the excitement of the 17-lap race on the COTA, on the contrary. It was to be another gripping show with many lead changes. Xavier Artigas got off to a good start and found himself leading the Moto3™ field after just a few laps. Artigas, who was impressively strong on the brakes, was on course for the podium for a long time, but had to to manage a difficult situation with another rider on the last lap, avoided the crash and ended up in 6th place. The gap to the Grand Prix winner was only 1.5 seconds at the finish. Carlos Tatay tried to improve his feeling on the track from lap to lap and crossed the finish line in eighth place.

A good overall result for the team of CFMOTO Racing PruestelGP, that is 3rd in the teams standings. Both CFMOTO pilots are currently wihtin the top10 of the fastest Moto3™ riders of the world. Tatay on P7, Artigas on P10.

The paddock prepared their boxes and freight on Sunday evening after a stint of the calendar that has involved races in Qatar, Indonesia, Argentina and the USA. Round five will take the series back to Europe and for an extended streak of events in countries such as Portugal, Spain, France, Italy, Germany, Netherlands and Finland into the summer.

“I’m quite happy with the race. 6th position was not bad. I was losing a bit of time on the straight but in breaking I was very strong. I will be ready for Portimao and we’ll see what we can do there.”

“We had a difficult weekend and I didn’t manage to get a good feeling. I fought until the end of the race and 8th is not bad, not good and not really where we want to be. I want to keep improving and it’s good to get back to Europe now and to tracks I know better. I’m looking forward to enjoying the next couple of races coming up.”