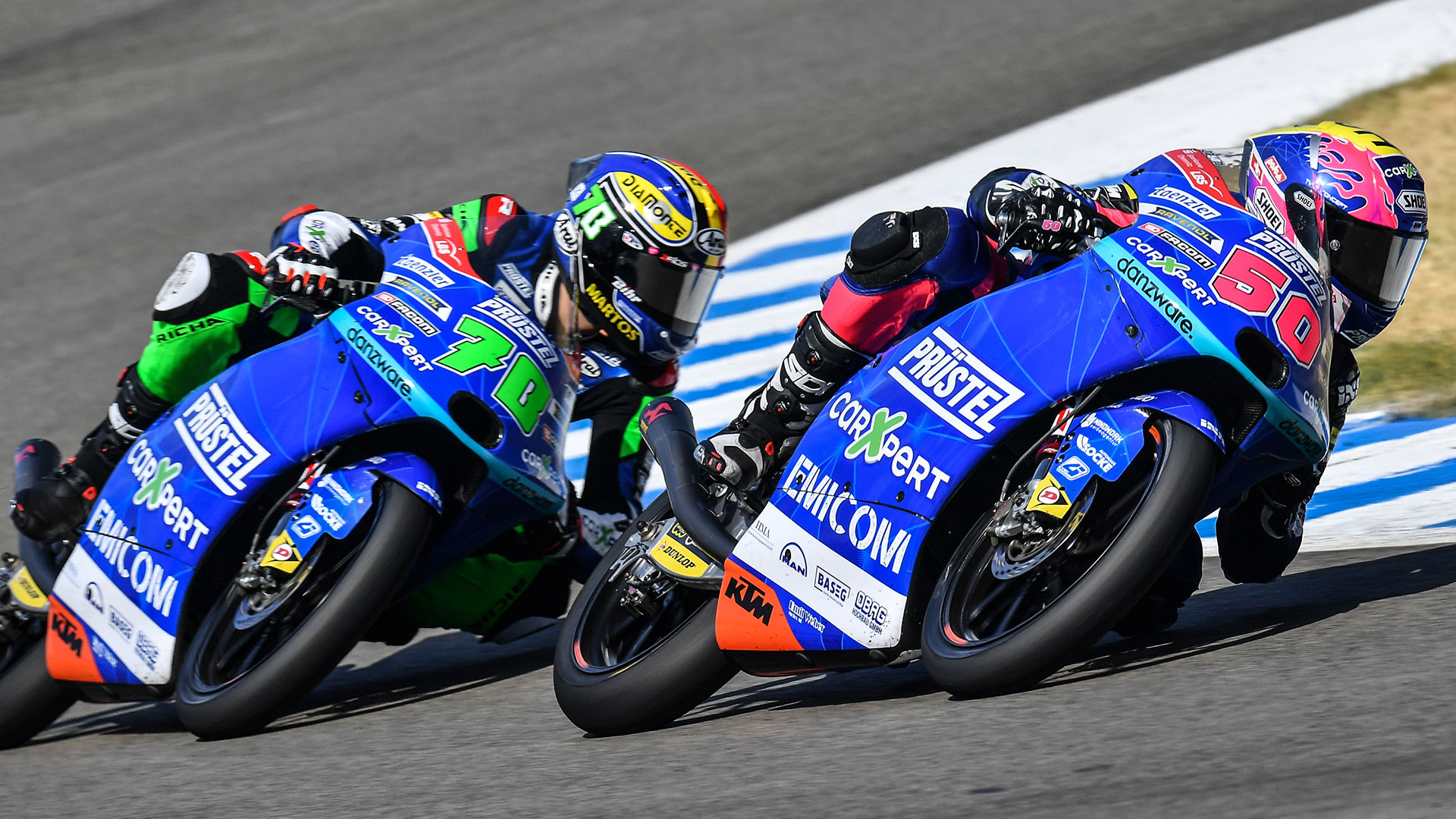 The Circuito de Jerez -Angel Nieto hosted for the second weekend in a row the Moto3 World Champiosnhip, this time for the GP de Andalucia.

As it happened in the previous round, hot temperatures characterized the whole weekend, as the sun never stopped to shine on the Spanish track for all three days.

After a short break, PrüstelGP got back on track on Friday morning full of motivation and desire of improve the lap times of the previous week. Both rider were able to reach a good 1´47 already in the first session, even if the lap time was not improved in the afternoon due to the very high temperature. But it was on Saturday morning when both riders set their best lap times, respectively 1´46.462 for Jason Dupasquier and 1´46.984 for Barry Baltus.

Despite the good performance and the effort, the bad luck didn´t allow Barry and Jason to concretize a good placement for the starting grid. The hard work of the whole weekend anyway kept them positive for Sunday race, both aware of their potential.

On Sunday morning both riders ended the warm-up session with a gap of less than 1,5 second from the leader. The race goal for both Jason and Barry was clear: to recover as many position as possible.  And this time the expectations were not disappointed! Both riders were protagonist of a solid race, with a great pace and in some part of the race even faster than the first group. They constantly fought for the leading of their group and finally could finish the race in 17th place for Baltus and 19th for Dupasquier.

Now it´s to charge the batteries before three back to back races in Czech Republic and Austria. The appointment is for Friday 7th August in Brünn for the first Free practice session of Czech GP.

It was my second race as a Moto3 rider in World Championship, I am really happy about the result of today. The first weekend was a bit more difficult compared to this one. In the second one I was able to improve my laptimes and I was faster in every session, even if the result didn´t show it. I am really satisfied with the race because I was able to fight and keep a good pace for the whole race. I finished 16th and since I went on the green, I had to drop one position so finally I was 17th. I reduced a lot my gap from the winner, 23 seconds faster then the first race. I am starting to understand what means being a rider in World Championship. I am really happy for the team, I want to thank them for the hard work, as well as Zelos and my family.

The second race weekend in Jerez was good. We started to work hard already from the first session. The qualifying was a bit difficult, we were fast but the others were even faster. I started from the 28th place of the grid, I had a good start and after then after the first lap I was fighting to catch the group in front of me. The race pace was good from the beginning.  I spent most of the race in one group, fighting constantly and I was able to understand what I can improve for next races. Today´s race was really positive, I learned a lot and I am sure I can do even better. We are not far from the points. Can´t wait to be back in Czech Republic for the next round!

It was a strong race for our two rookies. Of course, the grid positions we gained were not a good starting point but at the end of the race we can be satisfied. And this is what matter the most.  Jason had a very good start again and was able to move up to 19th place in the first few laps. Barry was later able to catch up with the group in front of him and even managed to pull away with Kunii. In the end we were close to the points. Jason and Barry did their job very well. In Brno we will continue this performance trend.