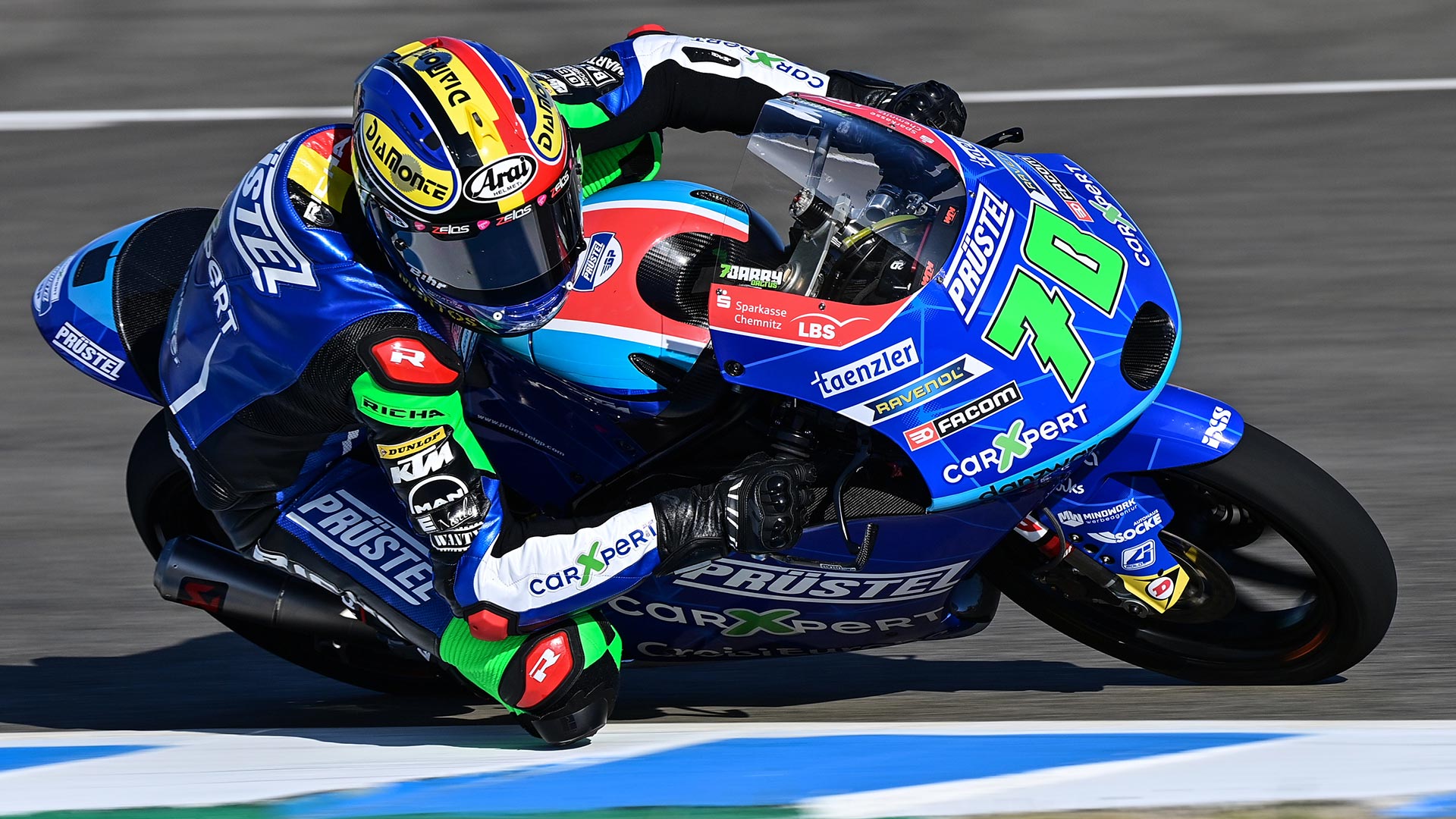 CarXpert PrüstelGP and its riders are ready to go back on track at Jerez de la Frontera (Spain), after a 4-month break due to COVID-19 outbreak. The Andalusian track will be the theater of a double weekend of action: two races are scheduled for Sunday 19th and Sunday 26th July.

Jason Dupasquier and Barry Baltus, which will make his debut in Moto3 World Championship, could enjoy a day of testing on Wednesday 15th July. For Jason, it was the opportunity to get back on his bike after the first race in Qatar, while Barry had the very first taste of his 2020 bike. Thanks to their experience in FIM CEV Moto3 and Red Bull Rookies Cup, both riders are familiar with the Spanish track.

The first test session was aimed at shaking off the dust for both riders. During the morning session both riders completed a few laps in order to test the feeling with the bike after the long break. Jason made a total of 31 laps during the day and in the afternoon was able to lower his morning laptime by 1,5 second. Barry was focused on getting familiar with the new bike and completed a total of 28 laps.

Now the next track activity is planned on Friday 17th of July at 9 am. The season has officially restarted and Carxpert PrüstelGP is ready to give its best!

Finally we are back racing after four months. During this forced break I was able to do a lot of bicycle in Switzerland and as soon as I was allowed, I went training with motorbikes in France and Spain, also with motocross and endure bikes. But I have been waiting to go back to my Moto3 bike so much! At the first exit with the bike I had to get used to it again, I didn´t feel at ease. But after a few laps I was able to improve my feeling and enjoy the riding. I am satisfied with the work but the speed is still not enough. After only two session the feeling with the bike has improved and I know I can be faster. I hope to do a good restart of the season and I will give my best for the upcoming races!

It was finally time for my first day with the new bike and working with the new team. I couldn´t take part in the first test in February due to a small injury to the shoulder, I took advantage of the lockdown to recover. I couldn´t train from January to March and then because of COVID-19 I had to stop. My shoulder is not at 100% but it´s going better. Today we only had two session of forty minutes so it´s not too easy to find a good feeling in a short time, but I was able to improve in just few laps. Moreover it´s very hot and this makes it even more difficult. In the morning I did seven laps in the first run, and we had some small problem that we are trying to fix and didn´t allow me to get a good laptime. Anyway we still have free practice session and qualifying to improve in order to get ready for the race. As it´s my first race in World Championship, it will not be easy also because of the high temperature. But I don´t want to stress too much, only enjoy my debut in World Championship and give my best. I am fully motivated for the race, I am trying not too feel any pressure and I am ready to learn as much as I can. I am racing with the best riders of the world, last year I watched them from the TV now I am competing against them!

After 4 months of forced break we are finally back on the track and it is nice to work with the team and our riders again. For Jason it was a comeback, for Barry the long-awaited first test for the Moto3 World Championship. We gave Barry a warm welcome to our team and I think he has already settled in well with us. Despite the heat here in Jerez, both riders have worked very hard and made good use of the short sessions, even if the lap times don’t show it yet. I am sure that Jason and Barry will improve over the next few days and races. We don´t want to put any pressure on them at this stage. I told them that the most important thing is that they give their maximum at any time of the race weekend and then I am sure, results will come.