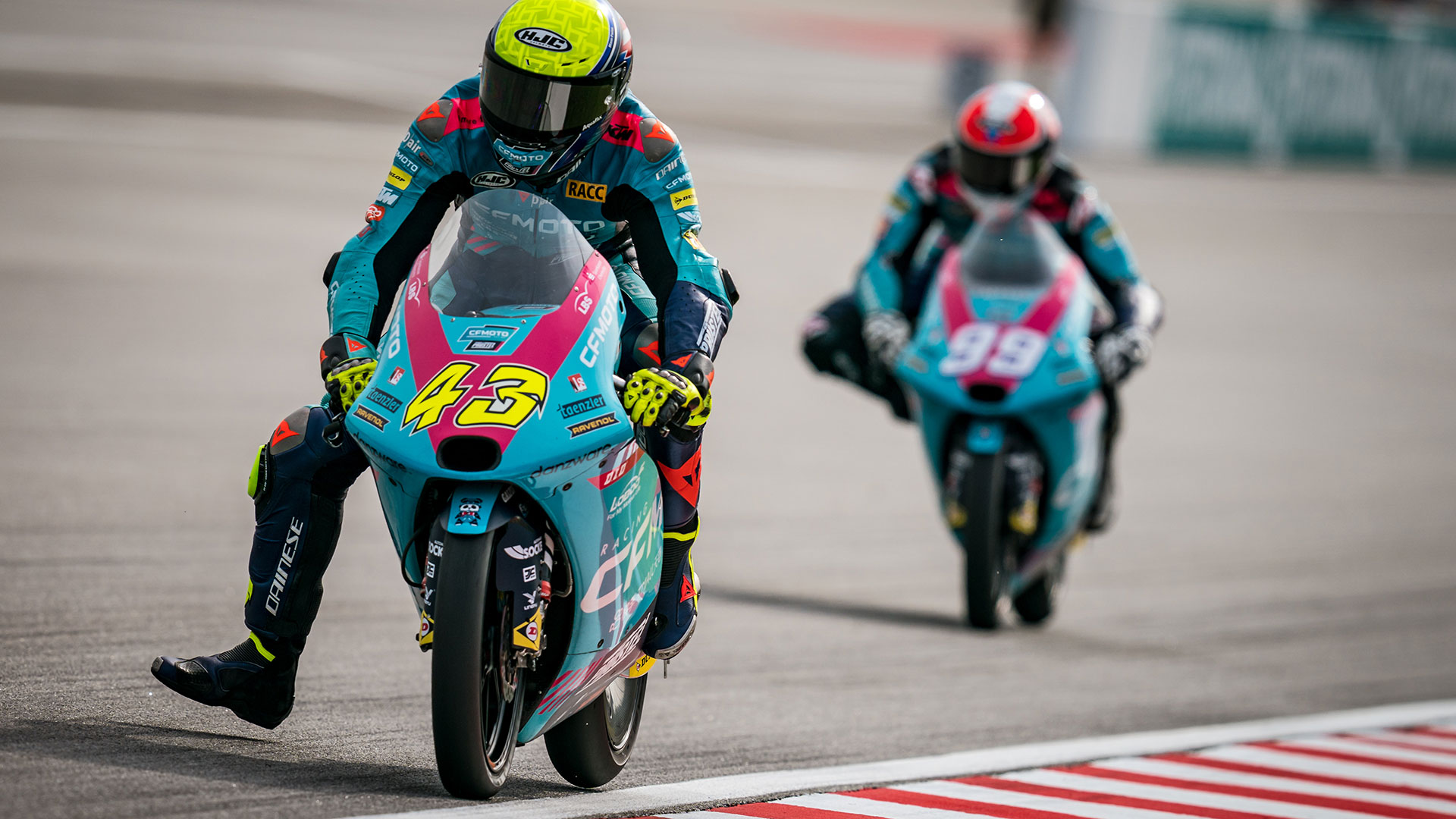 The heat was on at Sepang. The wide, fast and demanding 5.5km circuit close to Kuala Lumpur’s International Airport welcomed MotoGP™ back and offered typically hot and humid conditions throughout the weekend and sudden as well as frequent rain showers. This weather mix made it one of the most grueling Grands Prix of the season.

Like everybody else in MotoGP™, the CFMOTO Racing PruestelGP team were negotiating Sepang for the first time in three years. Both Carlos Tatay and Xavier Artigas had to discover the long straights and mixture of tight but also fast corners with ‘rookie’ billing. The crew spent Free Practice setting up and gearing the CFMOTO prototypes to cope with the high-speed requirements. Artigas could not emerge out of Q1 and ranked 20th after Saturday’s qualification and Tatay was hampered by a crash starting Q2 which meant he was frustrated down in 16th.

Both riders had to risk some bold moves to gain positions in the opening phases of the 17-lap dash on Sunday but Artigas’ push to reach the top ten after just five laps was impressive. Tatay lost some places and had to stop the race shortly before the end of the race due to pain from the previous day’s crash in qualifying. It’s a shame for Tatay, who was fighting. Xavier Artigas was only a short distance away from the leading group throughout the race, but was unable to catch up to the front because of several evasive maneuvers and was permanently in a duel with Deniz Öncü from Turkey. He finally crossed the flag in 11th place.

The Petronas Grand Prix of Malaysia ended with Artigas again in the points and the current season is almost at the chequered flag itself. Tatay is 15th in the Moto3™ standings while Artigas has 83 points in 16th with the CFMOTO Racing PruestelGP team sitting 7th from fifteen in their respective championship.

The engines will turn off for 2022 season in two weeks’ time when MotoGP™ heads back to Spanish asphalt. The flat and compact Circuito Ricardo Tormo in Valencia will tally race #20 of the year.

“Well, in the end we finished 11th despite starting at the back of the grid. I felt better today and I know I need to improve my qualifying to be better in the race. The bike worked well and I believe we made another step forward with what we learned and how we work. I’m excited for Valencia already.”

“I’m not sure what I can say. I felt so good yesterday. I had a lot of power to do what I needed and wanted on the track. FP3 went well and if it wasn’t for the issue in qualifying then we would have been higher on the grid. Today I could not get going. It was frustrating and hard to take. One more GP to go in Valencia, and I really hope we can aim for better there.”