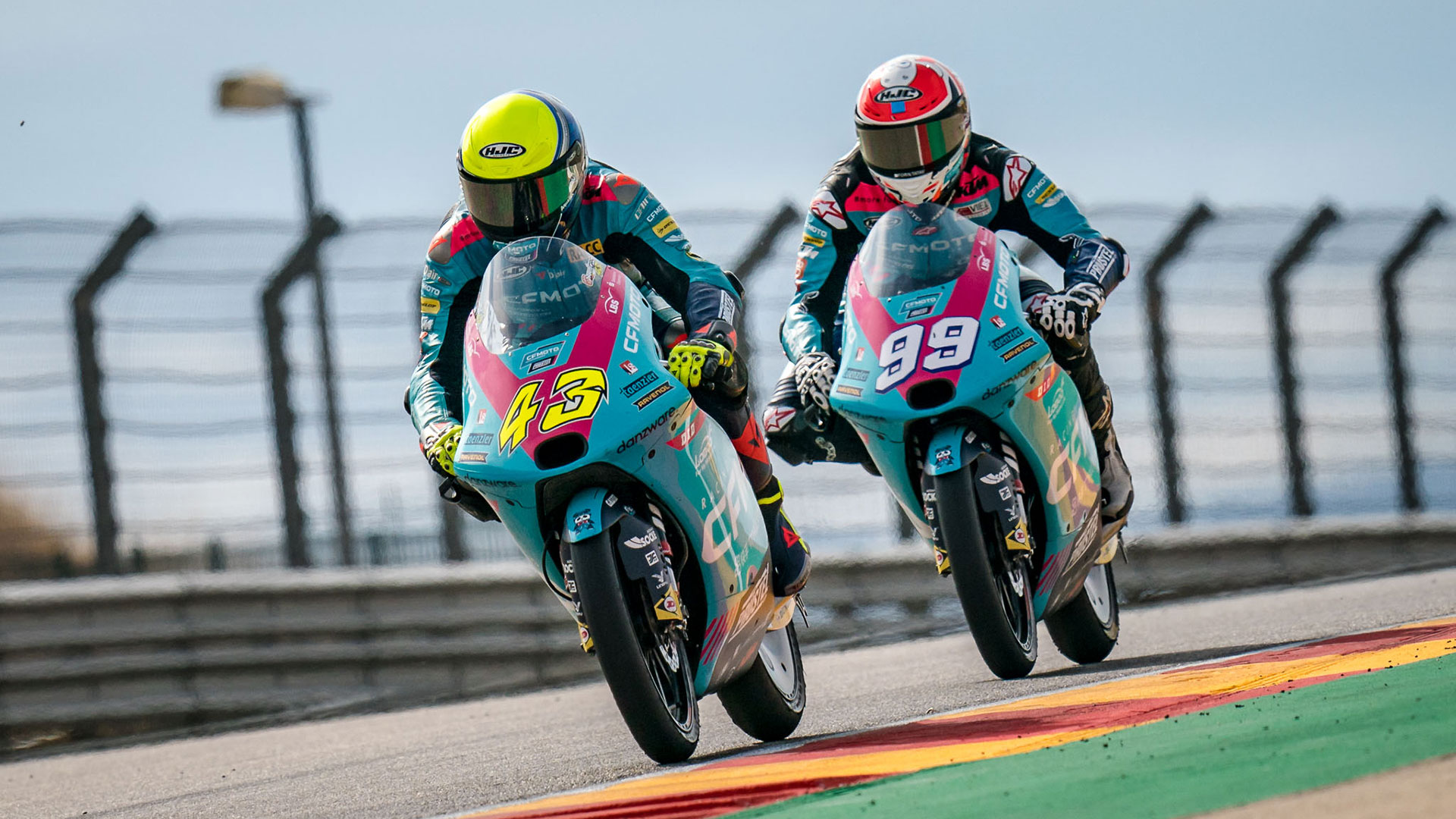 MotoGP™ blasted around the MotorLand Aragon circuit in eastern Spain and the CFMOTO Racing PruestelGP team gunned their CFMOTO racebikes to 9th and 11th in the Moto3™ division.

CFMOTO Racing PruestelGP were aiming for better results compared to the previous race in San Marino and with the advantage that both Xavi Artigas and Carlos Tatay were competing on ‘home turf’ and with distinct knowledge of MotorLand from their days coming through national and junior championships.

Their pace was obvious from Free Practice and Qualification when the finished 10th and 11th and only eight tenths of a second from Pole Position.

The blue skies and sunshine that had graced MotorLand on Friday and Saturday had clouded over slightly on Sunday and where the 19-lap Moto3™ race opened the schedule. Artigas and Tatay slotted their prototype 250cc race machines into the second group with designs on the top five. The tussle was intense with mere centimetres separating the riders and machinery and some tense overtaking moves coming throughout the distance. The showdown went down to the last lap and Tatay was aggressive and proactive to win at least two positions and thrust his way to 9th: his best finish since taking 6th at the Catalan Grand Prix in June. Artigas was pushing hard and could feel his teammate’s exhaust heat but was just squeezed out of 10th place by John McPhee.

CFMOTO Racing PruestelGP are 6th in the Teams standings and are 47 points from 5th. In the Rider’s Championship Tatay remains in the top ten while Artigas trails just behind in 11th.

MotoGP™ quickly says ‘Adios’ to Europe now. The whole show travels across the continents and to the Mobility Resort Motegi for the first Grand Prix of Japan since 2019. Thailand, Australia and Malaysia then follow in the next four weeks.

“It was a nice weekend of working hard for our goal. In the race we knew the long back straight wouldn’t be easy for us with my size and weight but I was making some good moves on the wide last corner. I fought until the end. In general, a decent weekend and now let’s go to Japan! I’m very excited to start the Asian tour of the calendar.”

“I’m quite happy with the weekend overall although I think our race position does not really reflect how competitive we felt. I was able to brake strongly but couldn’t quite get as close as I wanted to make more overtaking moves. We know where we still need to improve though. In Motegi we want to be further forward, to fight more with the leaders and enjoy the race. We made progress here in Aragon and we want to continue like this.”