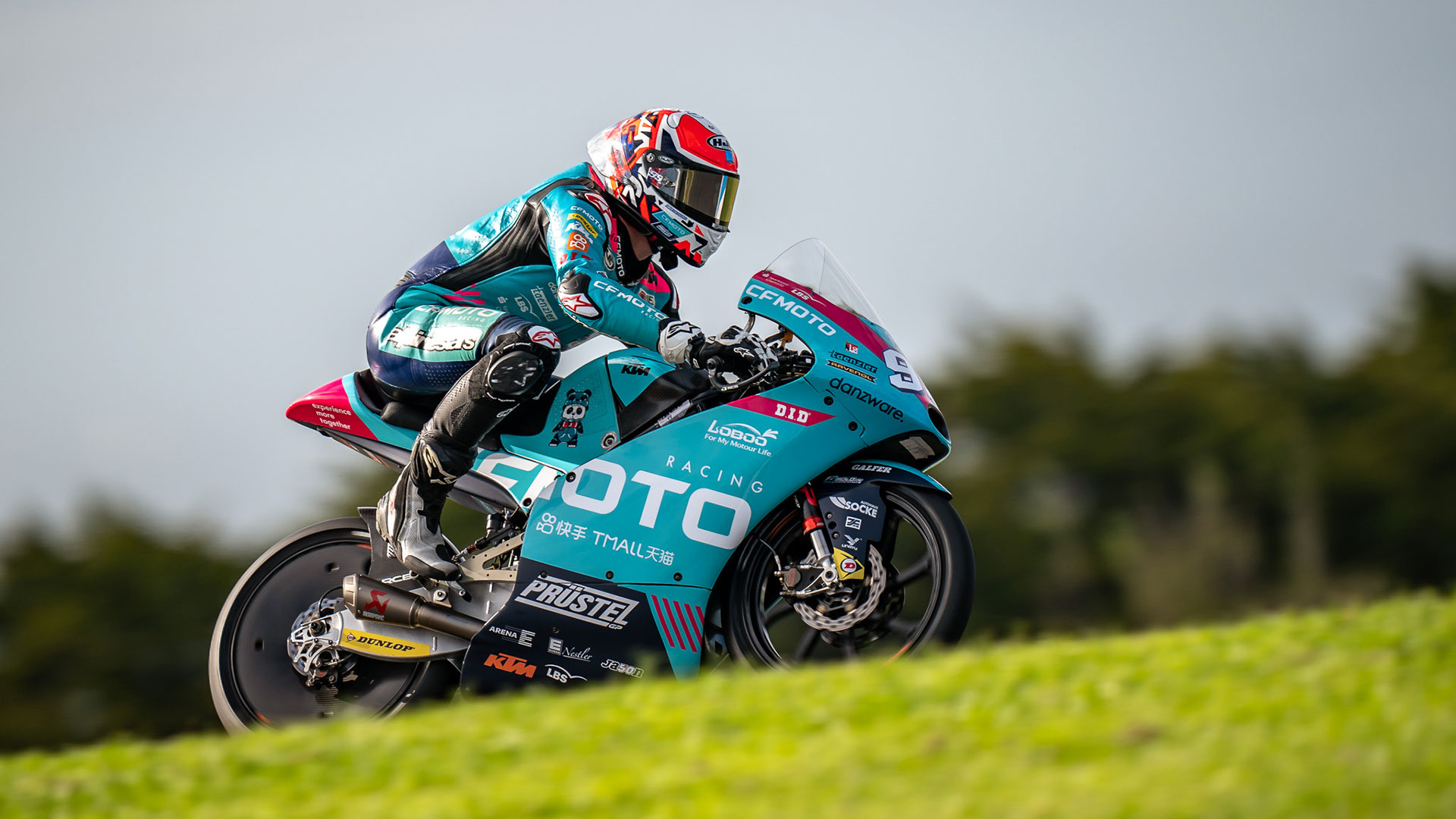 CFMOTO pilots score points Down Under

MotoGP™ moved to round eighteen of twenty and to one of the fastest and most picturesque Grand Prix circuits in the world: Phillip Island. There are few racetracks that wind, bend and strain engine performance to the maximum like Phillip Island. MotoGP™ had not travelled to the southern site for three years but the challenge of the course – with few hard braking points and an emphasis on corner speed and slipstreaming.

That was a challenge for CFMOTO Racing PruestelGP riders Carlos Tatay and Xavier Artigas, who were discovering the Australian island’s spectacular circuit for the first time.

After a rainy build-up, the two days of practice and qualification were dry and sunny but also typically windy and occasionally chilly. Carlos Tatay relished the thrill of Phillip Island through Q2 and drilled his distinctive CFMOTO prototype race machine to a decent 4th position on the grid. The placing gave him the first slot on the second row and was his best Saturday run since round five in Portugal. Xavi Artigas could not burst out of Q1 and had to start the race from 24th.

On Sunday morning Tatay was finally able to profit from his – and the team’s – fine work on Saturday to lodge his #99 bike into the top half of the Moto3 pack. The Spaniard could do nothing about the breakaway lead quartet but was pushing the limits in the battle among the third group and only just missed out on the top ten by less than one second on the flight to the line. Artigas made progress to be near the same space on the track and beat former GP winner Jaume Masia to obtain 2 points for 14th.

Two races remain on the calendar and with a bounty of 50 points left to win. Tatay holds 13th in the championship standings while Artigas is 15th. CFMOTO Racing PruestelGP are 7th in the Teams’ ranking.

2022 MotoGP™ will reach a conclusion in just three weeks. Only seven days separate the dash in Australia from the Petronas Grand Prix of Malaysia at the Sepang International Circuit. The world championship then hurries back to Europe and to the flat and compact Circuito Ricardo Tormo in Valencia, Spain for the finale.

“Finally it was a positive weekend for us. We could make some good corner speed and lap-times but just suffered in that third group and fought for as much acceleration as we could. We fought until the very end and will continue to do so now as the season is almost done. Just two races and we’ll keep on pushing to finish in the best way possible.”

“Well, starting 24th we could finished 14th and I’m not that happy with the position but we’ll take the positives from today. We were closer at the beginning but a few incidents broke the group and I tried to win my battle but it was tricky out there with the long straight and so many fast corners. I was always trying to get in the slipstream and it was a bit of a shame not to latch onto the group ahead but I couldn’t quite manage it. We’ll work now for Malaysia.”