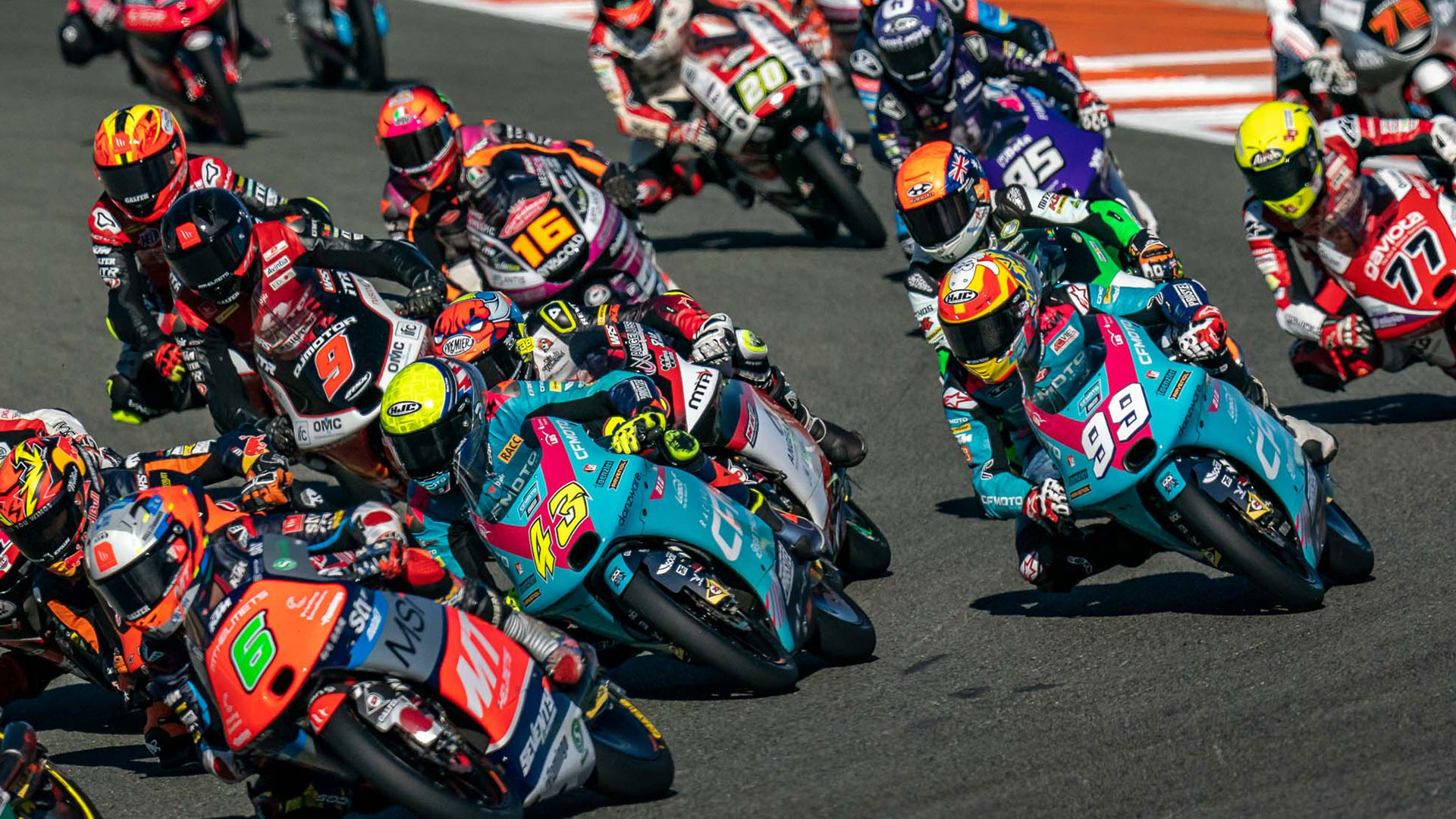 The final Grand Prix of the 2022 MotoGP™ FIM world championship ended a memorable, educational and tremendously fun maiden season for CFMOTO at the peak of motorcycle racing competition. The Gran Premio Motul de la Comunitat Valenciana pulled the series to Spain for the fourth time this year and to the Ricardo Tormo Circuit on the east coast.

For CFMOTO Racing PruestelGP’s two Spanish ‘aces’ the 25th Grand Prix at Valencia meant a return to a well-known stage. Both Carlos Tatay and Xavier Artigas have spun many laps in formative junior championships as well as Grand Prix outings and tests. The secrets of the Ricardo Tormo have long been unlocked but the autumnal climate can sometimes throw a curveball into play. Through Free Practice on Friday the sunshine hid windy conditions and the blue sky contained slightly lower temperatures on Saturday, meaning the riders had to be extra careful for grip and tyre warmth.

Carlos and Xavi avoided any drama and put their CFMOTO machinery directly into Q2 on Saturday. After a typical flurry of fast laps and looking for the optimum ‘tow’ it was Artigas who took the most advanced position on the grid with 15th as Tatay followed close in 16th. Less than one second divided the top 18 riders as the Moto field prepared for another 23-laps of intense track space swapping.

Sunday morning dawned, and CFMOTO Racing PruestelGP were as intent and focussed as the Spanish sun was bright. 100,000 spectators had funnelled into the expansive seating areas and the atmosphere crackled, with championships still to be decided in the Moto2™ and MotoGP™ categories. Moto3™ opened the programme and 14 racers formed the third group pushing for 5th with Artigas in the unmistakeable shade of the CFMOTO machine at the front of the posse. Tatay was further back in the same melee and forced his way to 13th by the flag. Artigas set the fastest lap on the way to 7th but then lost control into Turn 6 with only six laps to go. He was able to recover his bike and re-enter the race but was chasing space in 23rd.

A long Grand Prix year that kicked off in Qatar in March ended with Tatay and Artigas collecting 15th and 16th positions in the championship table. CFMOTO Racing PruestelGP were ranked 7th from fifteen teams in Moto3™.

After a well-earned break, the prospects for 2023 are already being analysed! Tests for next season will get underway with private sessions as well as official IRTA days and the trip to Portugal to race again will not be far away.

“The season has finished and it’s been a year where we’ve learned a lot. Thanks to the team for always supporting me. We had some complicated moments but we pushed through them and moved forward. I wanted more from the results but gave what we could. Now it’s time for a new direction in my career but I will always carry a part of this team in my heart. I hope we can cross paths again soon.”

“Well, the season is over and it didn’t finish in the way we wanted, especially because the first part of the race was good and I was fighting near the front. It was a strange crash but I was able to grab the bike and finish the race at least. Thanks to all of the team for this year: it’s been a challenge at times but we always tried as hard as we could and now we’ll prepare as well as we can for next season.”