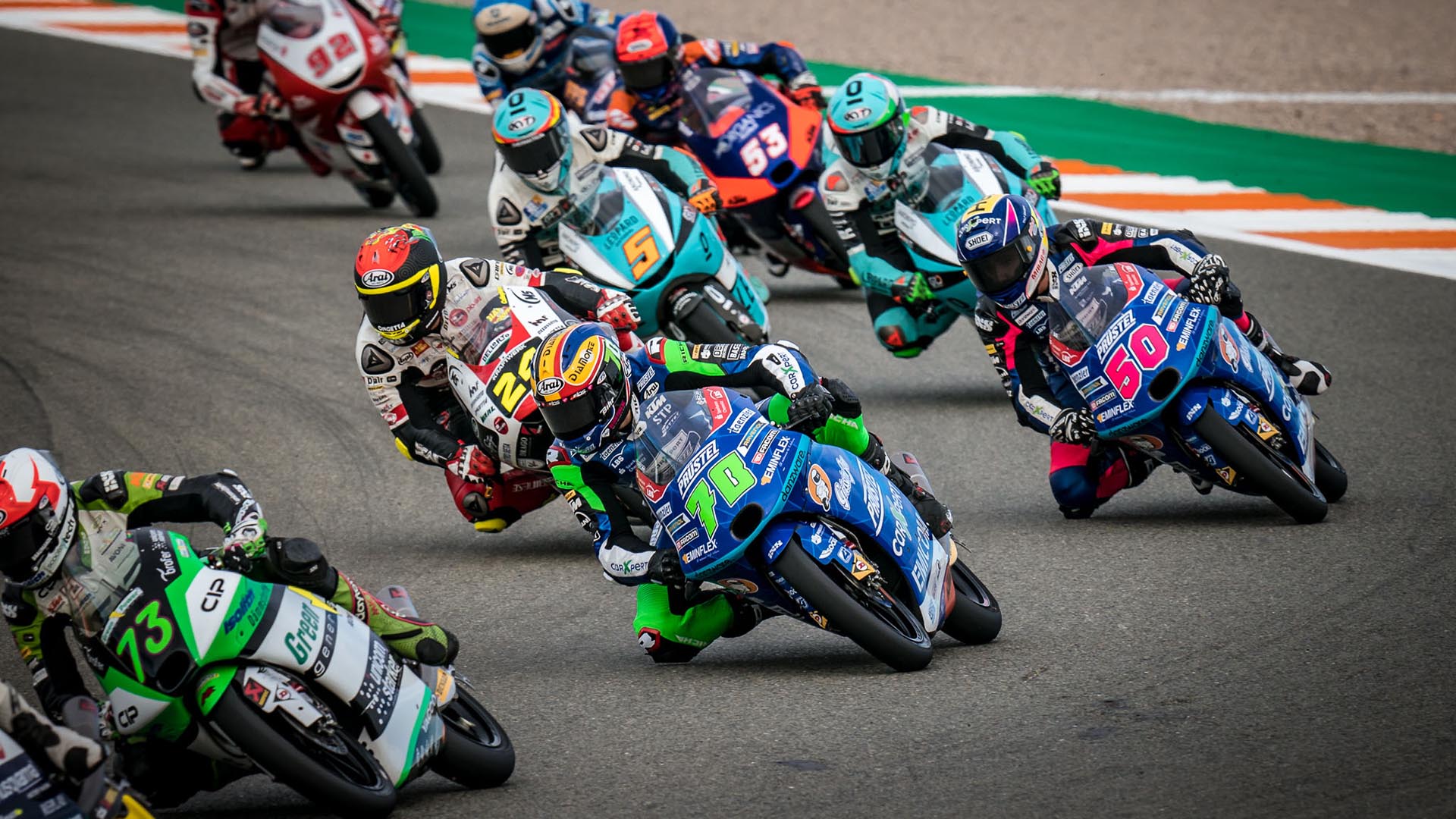 The first of two races scheduled at the Circuit Ricardo Tormo took place from 6th until 8th November. It was definitely a strange weekend in terms of weather conditions. In fact Moto3 World Championship had to face several weather changes also within a single session.

First free practice day started on wet, a very favorable conditions for Carxpert PrüstelGP riders. Both Jason Dupasquier and Barry Baltus proved to have an impressive feeling with their bike under he rain.

Same conditions on Saturday morning, where the riders took part in another free practice session on wet track. The sun later appeared and it was expected to be a qualifying in dry track. But shortly before the start, it started to rain again.

Barry Baltus and Jason Dupasquier went on track at the very beginning with slick tyres, in order to take advantage of the track who was not completely wet. Both showed great lap times, pushing to the limits and being on the top of the time list. Unfortunately both riders crashed at the same corner in their fastest lap so far and couldn´t go beyond a 20th place for Jason and 22nd for Barry. The positive side is, their double crash had no consequences.

It was not at all a peaceful warm-up for Jason Dupasquier who was forced to come back to the box after two laps due to a technical problem. Due not respected black and orange flag, he was assigned a long lap penalty for the race. But Jason didn´t lose his motivation and did one of the best races so far. He did a great start and after doing his penalty, he start a great comeback that allowed him to be in the group fighting for the points. He finished his race in 18th place.

Barry Baltus was 25th in the warm-up of Sunday morning. Started well from his 22nd position but then to lost the ground with the group. He ended his race in 20th place.

Now PrüstelGP will have a short break before coming back on track for the second round scheduled in Valencia. The points are getting closer and closer for the German team.

First race in Valencia is over. I am happy about the end of the weekend. It was my best qualifying position of the season, starting 20th. The conditions were tricky as they changed a lot during the weekend. I needed to adapt riding style and also the mind. This morning in the warm-up, was the first time with a completely dry track. Only some places were still a bit wet. Unfortunately I had a technical problem and I lost my only chance to ride on dry track before the race. My team did an amazing job to prepare the bike for the race. It was difficult to find reference for the braking points as this weekend I had ridden only on wet. I did a good start, I was careful in the first laps because I had to see how the bike worked but then the feeling came. I did my long lap penalty, and then I started to recover positions and enjoy the race. Next weekend I hope we will finally reach the top-15. I want to thank my team and all the sponsors!

It was a difficult weekend. I was a bit disappointed because I was expecting something more. We had a good Friday, we were really fast in the qualifying but then we had a crash. The warm up was the only opportunity to race on dry track before the race. I didn´t have a good feeling so we did some changes for the race. The first laps of the race were okay but then we started to lose position and I had always less feeling. Unfortunately also this time I coudln´t achieve the points. But I know next weekend we will improve more and more.

Even though Jason achieved his best starting position of the season, he couldn´t take much advantage of the starting position. The warm up this morning was the first session that was run in dry conditions but with cold temperatures. So there was not much time to find a suitable setting for the race. Then we were doubly unlucky: Not only did Jason had to miss his warm up due to a technical problem, he also got a long lap penalty for the race because he didn’t leave the track fast enough. Not the best combination to start a race day. But he didn’t lose his mind and showed a good race with a very good pace. In the end he is on place 18. Barry instead had a difficult race. Unfortunately, his set-up was not perfect and he had to fight not to lose touch with the other drivers. Nevertheless he fought hard and gave his best. For next weekend we will now analyze the data and be stronger.