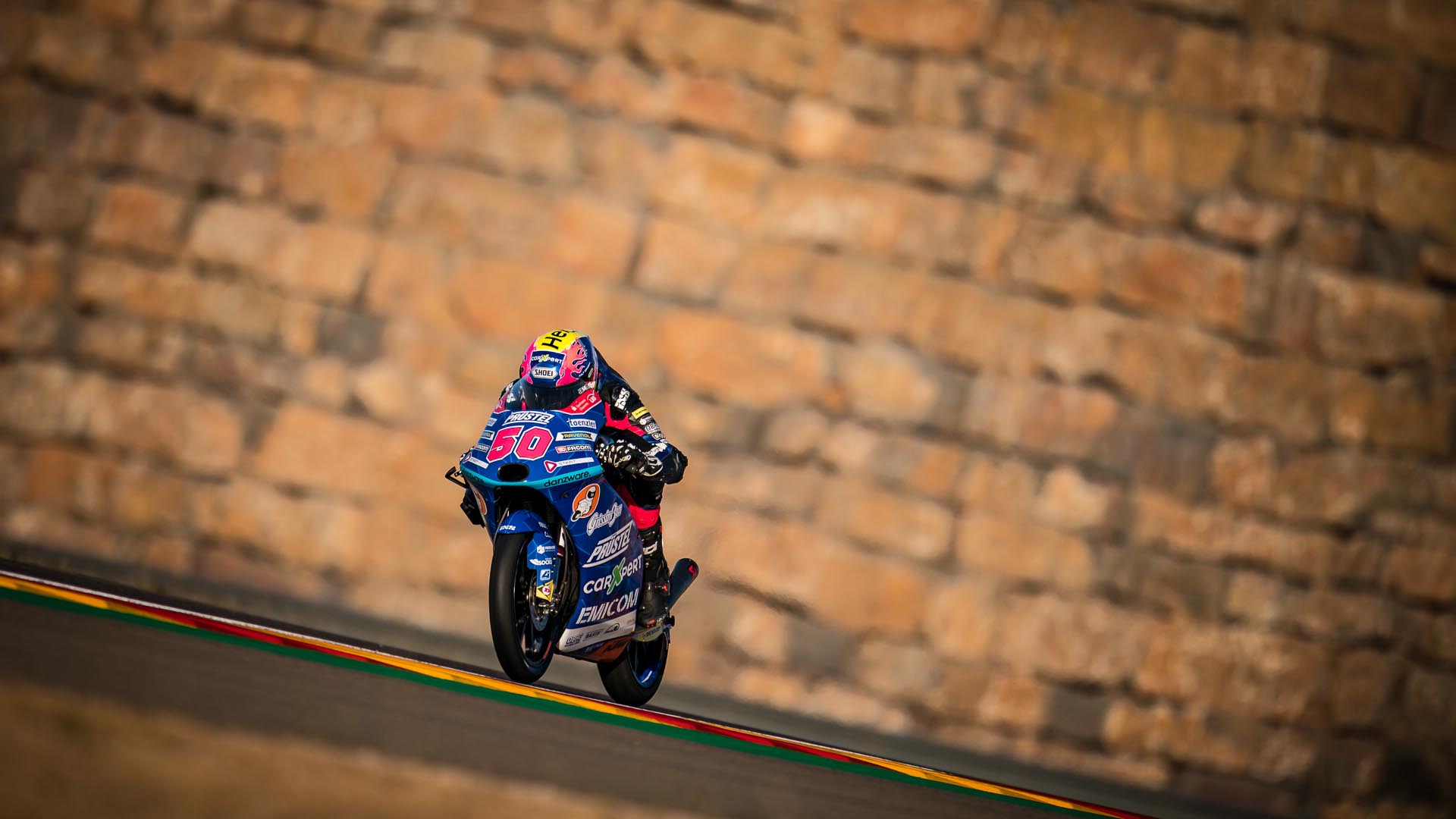 After the French GP, Moto3 World Championship came back on track at Motorland Aragon (Spain) for the first of two round scheduled on the Spanish track. The Gran Premio Michelin de Aragon

The first session of free practice on Friday was marked by many crashes, due to the ground temperature of only 8° degrees. Despite the freezing air, Barry Baltus show a great feeling with this kind of conditions. The warmer temperature of the afternoon allowed all the riders to improve their best laptimes.

After a rescheduling due to the dangerous conditions of the track on early morning, the FP3 started on Saturday morning at 10:00. Both riders had a small crash, with no major consequence. In the qualifying session, rescheduled at 13:15, Jason Dupasquier repeated his best seasonal starting grid position, as he qualified 23rd. Despite the good performance of the previous sessions, Barry Baltus couldn´t go beyond the 29th place.

After a promising warm up on Sunday morning, Barry Baltus struggled to keep the pace in the race and couldn´t fight in the group for the points, ending his weekend on 25th position.

Jason Dupasquier showed a strong performance during the whole race, recovering positions and fighting constantly for the top-20. Unfortunately at last lap he ended at 22nd place, a result that doesn’t give honor to his good performance.

Now PrüstelGP will have a short-break in order to recover forces for the next round, scheduled already next weekend always on the Spanish race track. Learning from the previous race, the team will fight to reach the well-deserved points!

I am pretty happy about the end of this race weekend. Despite the final result, the race was really good in terms of performance, I had a good rhythm. In the first lap I touched with another rider and I found myself in the last position, I didn´t loose the mind and with a good pace, I started to recover positions. All this alone. I managed to catch the group in front of me, and fought with them for the whole race. I proved to have a good pace, I think I can improve further next weekend.

It was definitely a difficult weekend for us, probably the most difficult one of the season so far. The feeling with the bike was good but laptime and result are not coming, so I am a bit upset. Luckily we have another chance to do well here, I want to come back stronger next weekend. As always I will do my best to reach the points.

It was certainly not an easy weekend for us. The track conditions were not easy for everyone due to the cold temperatures. But we worked concentrated and in the end we can draw a positive feedback. Of course we haven’t reached our goal yet, but Jason showed a solid race today. He was able to set fast lap times and lead his group in P19 for a long time. For Barry, the key to success is still a better qualifying. We need to be able to start the race from further up if we want to fight for the top 15. We already have several ideas for the coming weekend here in Aragon and we are taking some positive aspects with us. It’s good for rookies to have a second chance on the same circuit.