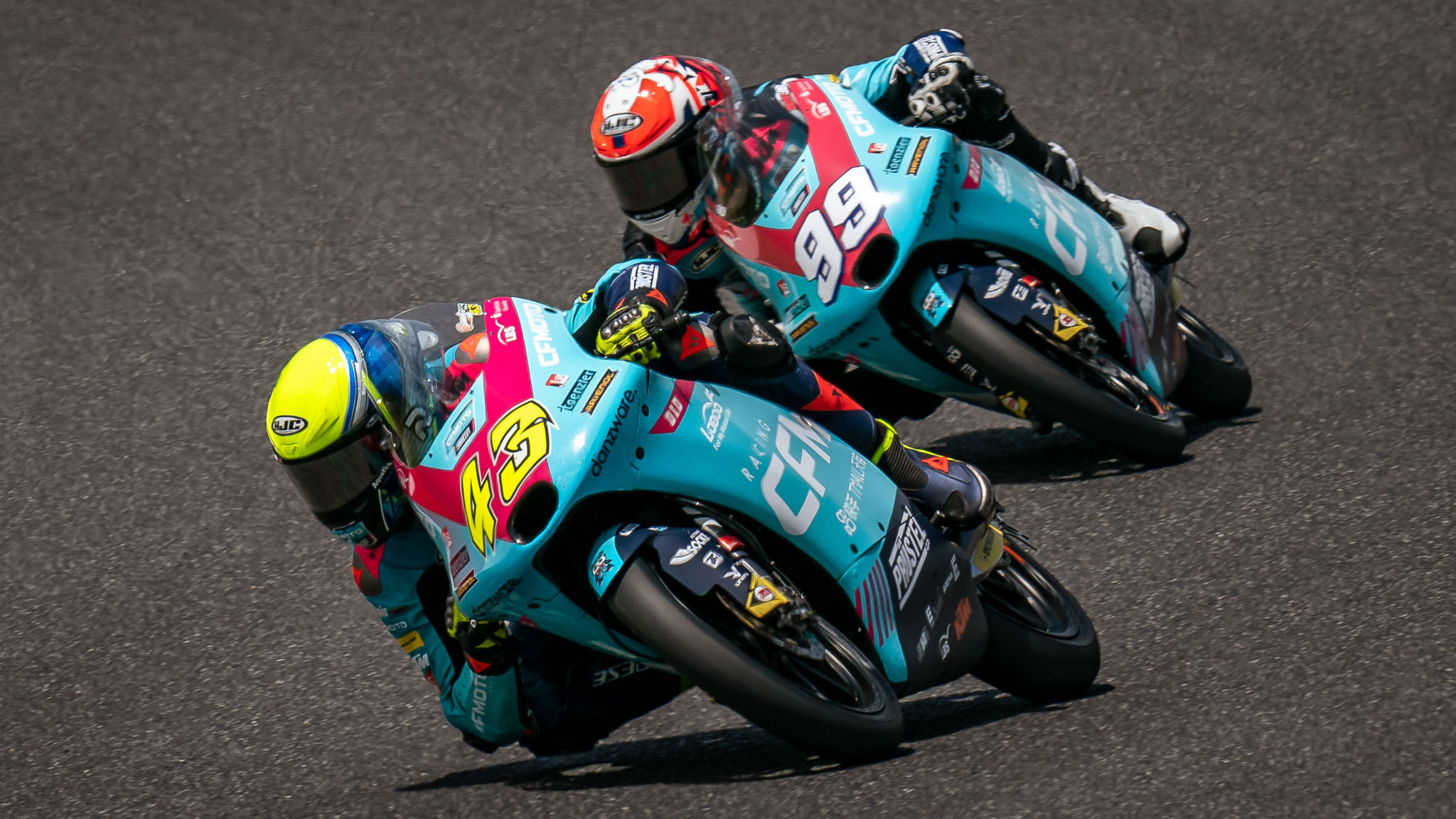 Emotional weekend with an unlucky end of the race

Mugello was an emotional weekend for CFMOTO Racing PruestelGP but also a memorable one as the newest brand to the exciting Moto3 category tackled the 5.2km 15-corner circuit for the first time.

Free Practice took place in sunny and very hot, humid conditions as both Carlos Tatay and Xavier Artigas got to work on refining the set-up to cope with the corner speed and high momentum of the Mugello trajectory. On Saturday the climate was more unstable and Tatay was the only rider into Q2, occupying 17th on the grid.

The race day on Sunday morning started with a good warm-up by the two CFMOTO riders and raised hopes of placing in the points.

Carlos hooked onto the main group on Sunday morning which was cooler and cloudier for the 20 laps. At the halfway stage of the race the leader, Dennis Foggia, crashed and his spiralling bike remained on the track and the pursuing riders had to instantly react to avoid the machine. Tatay was able to stay on two wheels but was obliged to head into the gravel trap and lost all hope of a top result. He found his way back to the asphalt and then rode some 30 seconds adrift of the tussle for trophies. He managed to pass Artigas and the two crossed the finish line just inside the top twenty.

The riders’ championship standings see Tatay in 9th and Artigas is 13th. The team remain 5th in the teams table as MotoGP barely lifts the throttle. The Grand Prix calendar immediately clicks onto round nine and around the varied curves of the Circuit de Barcelona-Catalunya in Spain next weekend.

“We worked really hard this weekend. We knew the speed and the rhythm we had, and we worked on our race pace while searching for a tow for that important single lap. It’s a track that is complicated for that! The race was going fine. I was in a good position and studying my rivals as the pace of the group was starting to climb. I was ready to attack but then Foggia’s bike just appeared in front of me and I couldn’t do anything. I went into the gravel and that was the end of our race. A shame but plenty of positives from this Grand Prix and if we do the same next weekend we can be very optimistic.”

“Honestly a weekend to forget. It was really hard for us. I couldn’t get my feeling on the track and it was a shame because I had good expectations here in Mugello. We’ll learn from this and I want better in Barcelona, which is a circuit I really like.“

“It was a difficult weekend. The starting positions after Qualifying were not the best. But we knew that Carlos Tatay in particular has a good pace and can push forward. Unfortunately, there was an evasive maneuver in the race, which cost Carlos a lot of time. Xavier Artigas has been struggling all weekend and hasn’t really got going. He tried to push but couldn’t bring it to the track. Xavier needs to finish the weekend in Mugello quickly and prepare for his home track in Barcelona. Next week it needs a big step forward to get the necessary self-confidence. Carlos has to keep it up, keep his focus and improve his timing in Qualifying, then he can attack again in the front group.”