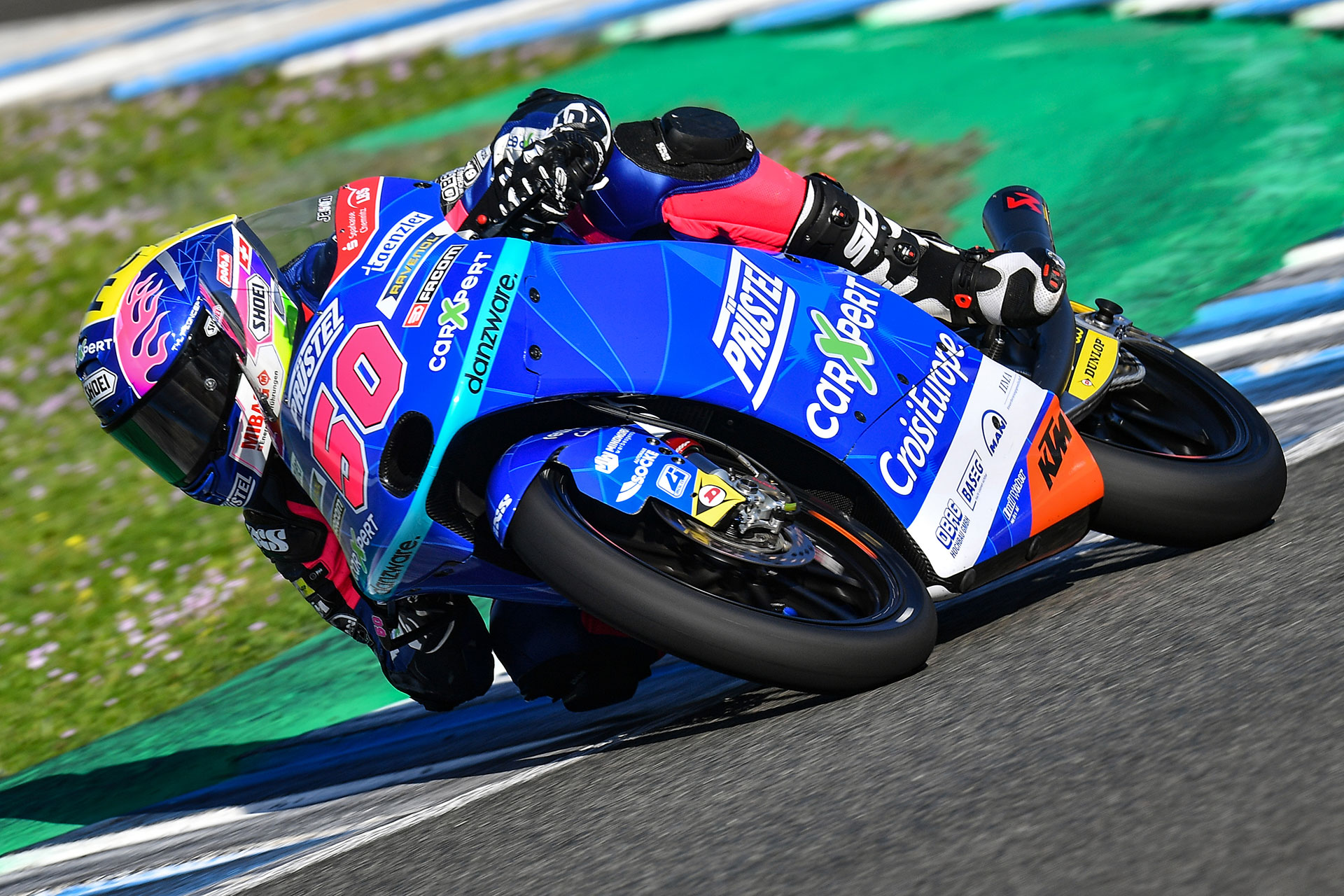 Instructive first test of the season for PrüstelGP in Jerez

Jason Dupasquier and Dirk Geiger had their first taste of 2020 season on the Circuito de Jerez.

The season of carXpert PrüstelGP has officially started under the Andalusian sun at the circuit of Jerez de la Frontera. Besides the Swiss permanent rider Jason Dupasquier, the line-up of this test was formed by the German Dirk Geiger, replacing the official rider of the team Barry Baltus. The 15-year-old Belgian rider, as is still not sixteen years old is not allowed to make his debut in World Championship until the weekend Le Mans.

After a two-day private test on Monday 17th a and Tuesday 18th, the Saxon team made its official debut in the 2020 season with three days of IRTA test on the Andalusian track. All three days were characterized by favorable weather conditions as the sun shone. For both rookies, the goal for this debut with the 2020 KTM Moto3 was getting familiar with the bikes as well as with the new team. Moreover both the riders had a special support from the box, with Barry Baltus being present at the test even if he couldn´t take part in it do to a small injure at his shoulder.

Jason, who had already raced on this track in Red Bull Rookies Cup and FIM CEV succeeding in getting a good LOWEST TIME, making great improvement day after day and increasing the feeling with the bike. Dirk, after competing on the Spanish track for ETC, managed to improve his best laptime of N° seconds from the beginning of this five-day test.

Now the pair is almost ready for the very true debut as riders of Moto3 World Championship in Qatar, scheduled on Sunday 8th of March. But first, another three-day test awaits them always on the Qatari track from 28th February to 1st of March, a great occasion to get familiar with the unknown track for both riders.

“What an intense week! This five days in a row of test were tyring but were a great chance to start to get familiar with my new bike and new team for this season. Day by day I improved not only my laptimes but, most important, also the feeling on the bike. In the last three days I had the chance to share the track with all the other Moto3 World Championship. I tried to learn as much as I could from the fastest riders, following them on the track. I need to improve my riding style in order to adapt it to my new bike but I am satisfied with my best laptime and with the position. I want to thank my mechanic because the guys made a really good job!! I am aware I can improve much more, that´s why I can´t wait to get back on track in Qatar.”

“My first time with the new bike and the new team was really great! For the first test, I am really satisfied: we worked really hard all together to improve step by step. The first day was all about trying to reach a good feeling on the bike, the laptime was not important at first. Everyday I saw that the feeling was much better than the day before, and also the laptimes that I reached proved it. The first day of IRTA test was really useful to learn from other riders, their high level motivated me a lot. I improved both laptimes and feeling at every exit, reaching good times and being constant. Also on the last session of Friday I was able to reach a fast lap, even if the wind was quite hard. I want to say thanks to the team, the guys made a really good job and they taught me many things. I have much fun with them. Now I am ready for Qatar. I can´t wait to be back on the bike again.”

“During the winter time the whole team has worked very hard, also thanks to the precious support of our partners. First of all, I want to thank all of them! Finally it´s that time of the year again and bikes are back on track. The season 2020 has officially started! We finish this five-day test with a really positive feeling. It was an intense week and we take advantage of the time we had to let our rookies ride as much as they could, which allowed both of them to learn a lot.

In these 5 days, Jason made 230 laps und was able to improve his best time by 1:46.945. He was really determinated to prove himself and to lower his laptimes always more. I am really excited to see what he is able to do during this season.

Dirk had to take an big step from ETC to Moto3 World Championship. He was able to improve impressively, collecting a lot of new information and constantly proving himself on the track: in the five days he made 250 laps. Even if his best laptime was 1:48:096, I am sure that his positive attitude will allow him to improve more and more, reducing the gap he now has from the top. The whole team is really proud of the rookies.. let´s see now what will happen in the next IRTA Test in Qatar!”