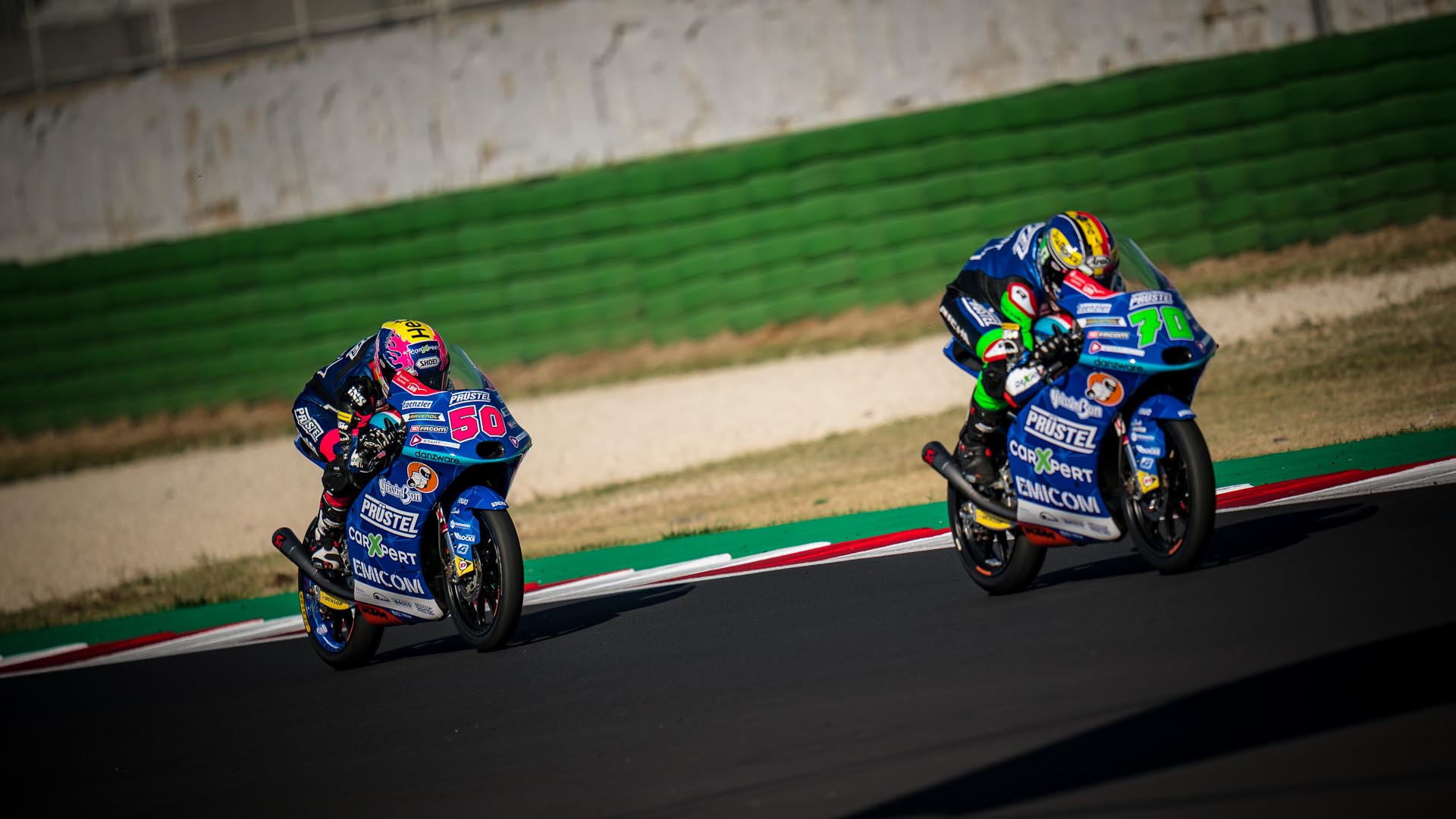 The Gran Premio di San Marino e della Riviera di Rimini was the first one of three rounds in a row, scheduled in the next few weeks between Italy and Spain. The race track named to the Italian rider Marco Simoncelli gave to Carxpert PrüstelGP riders the chance to get closer to the points and show good improvement.

Barry Baltus and Jason Dupasquier got back on their bike on Friday morning for the first session of the weekend. After struggling a bit in the morning, the two Carxpert PrüstelGP riders showed an impressive performance in the afternoon session. In FP2 both riders could improve their morning laptime of almost 1 second.

Saturday was again a difficult day for the team from Sachsenring, as they couldn´t take advantage of the great work made during the previous day. Jason and Barry classified in 26th and 29th position for the starting grid of Sunday. But the chase for the first points in the World Championship was once again the biggest motivation for both team and riders.

Jason Dupasquier started in 26th place, and even if he didn´t the best start, he was able to recover position and keep focused. He was fighting constantly for the top-20 and showing a great pace. He signed his best laptime of the weekend and the 5th fastest lap among all the riders.

Barry Baltus instead did a great start: 16th in the first lap, he was constantly in the points and ended at only 3 seconds from the winner. Unfortunately his race was compromised by a double long lap penalty. As he realized it only on the last lap, he got a time penalization of 38 seconds.

The team is happy with the performance shown by the rider and can´t wait to start the new race weekend in only a few dates. On Friday the chase for the points will start again!

I am happy about the weekend! I finished 19, in the top-20. The goal were the points, we are still not there but we are getting closer step by step. For me it was a positive race, the feeling with the bike is great and we also reduced the gap from the leader at the end of the race, this time it was 11 seconds. I believe in the team and I know we can do better and reach the point, that´s the clear goal for next week. I need to improve more but I am satisfied with the work done!

It was not a bad race despite the penalization! I finished 3 seconds from the front and then got 38 seconds of penalization for not doing 2 long lap penalties. This is the negative point, but I am happy because I feel that results are slowly coming. We were the whole race fighting for the points, constantly in top-15. The goal now for next week is to get a better result in qualifying, in order to start more in front for the race. Than I think we can fight in the front groups. I want to thank my team for the hard work, we have to keep working like that!

Today Jason and Barry showed a very good race. Despite the bad starting position, both riders were able to ride in the leading group for the first time. Barry was even in the points for some laps. We can see a clearly see a big improvement for both and we are very happy about that. Jason unfortunately had to let something tear off towards the end of the race. Of course we want to improve his 19th place from this race next weekend. Barry finished the race in 17th place, but received a time penalty afterwards because he failed to execute a long lap penalty in the race. This is also part of the learning process of a rookie. We will now analyse the race again and think about how we can improve next weekend.