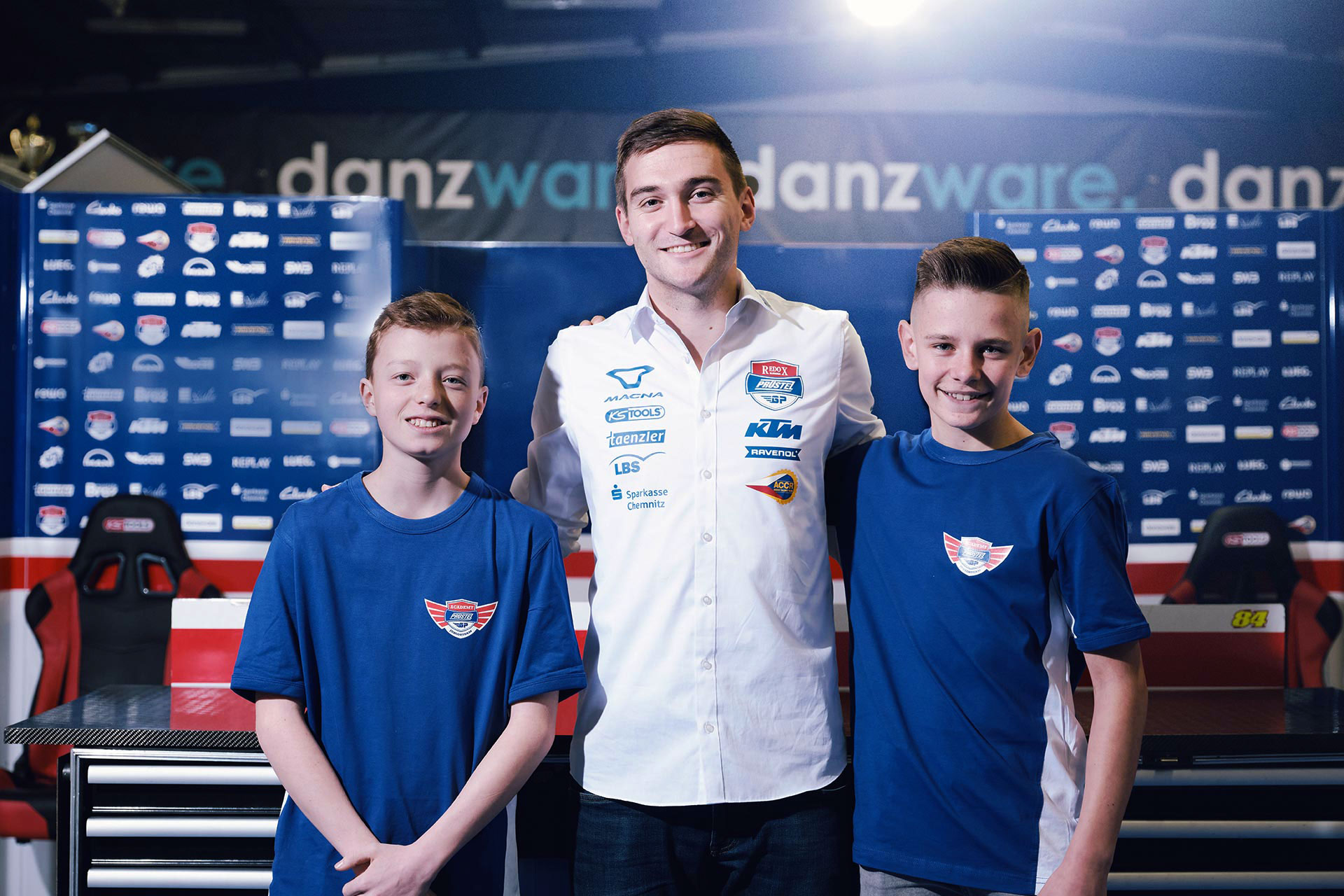 Just in time for Christmas Eve, there is a great news concerning our engagement to support young promising talents of German motorsport. The PrüstelGP Academy, based in Sachsenring and whose team manager is Florian Prüstel, will start in the newly developed Northern Talent Cup (NTC) in 2020 with the two Saxons riders Freddie Heinrich (14 years old, from Lunzenau) and Dustin Schneider (13 years old from Adorf/ Vogtland).

Freddie has already gained some international experience in the last few years under the PrüstelGP Academy colours, racing in the RFME Spanish Championship Moto4 in 2017 and 2018 and in the European Talent Cup (ETC) in 2019. Dustin made the leap to the ADAC Junior Cup in 2019 and finished 5th overall.

The NTC is part of the «Road to MotoGP™» program, which is a cooperation between Dorna, ADAC and KTM. The aim of the NTC is to give riders from Northern and Central Europe a new chance to improve their racing paths and to make their dream of becoming professional riders come true. The NTC is the perfect springboard from national championships to the FIM CEV Junior World Championship and/or the Red Bull MotoGP Rookies Cup.

The young talents will ride identical 250cc KTM bikes. The number of participants in this first year is limited to 24 riders aged between 12 and 17. Riders from all countries can still apply until the end of the year however the Cup is particularly aimed at riders from Northern and Central Europe. The race calendar is designed in order to save travel costs for those who otherwise would have to cross the whole continent to compete at a similar level. At least one top NTC rider will be given the chance to compete in the Red Bull MotoGP Rookies Cup the following year, and two more talents will compete in the Rookies Cup selection event.

After a pre-season test, 7 events are planned for 2020: NTC schedules two races per weekend, at least two free practice sessions and one qualifying session.

“I am very pleased that we will be the only German Moto3 team to compete in the newly created Northern Talent Cup (NTC) in 2020. This is a very important step for the support of young talented  German riders at an International level. For this reason we would like to thank our sponsors and partners for their trust in this project. With Freddie Heinrich and Dustin Schneider we have signed two very strong and promising talents who come from the immediate surroundings of our headquarters and home town at the Sachsenring. The first season of a new racing series is always very exciting. We don’t know yet which other riders and teams we will have to face and how high the riding level will be. What is certain is that we want to train hard with the guys and give them the chance to work with a professional team for the first time. The long-term goal is clearly to have a German regular rider in our Moto3 team again.”

“I am very pleased that I can be part of the PrüstelGP Academy again in 2020. I am already very excited about the NTC and also about the rivals that are waiting for me. I hope that I can apply what I learned in the European Talent Cup in Spain to this cup. Of course my goal is to finish on the podium. I will give my best and fight until the end!”

“Of course I think it’s great to be part of the PrüstelGP Junior Team. It’s a completely new situation for me next season, because it’s the first time that I will be in a professional team. As it´s the first season of the NTC, it will be exciting and thrilling to see who the other riders will be, how the new bike will behave and how the events will run. I hope to learn a lot and try to be at the front as soon as possible.“