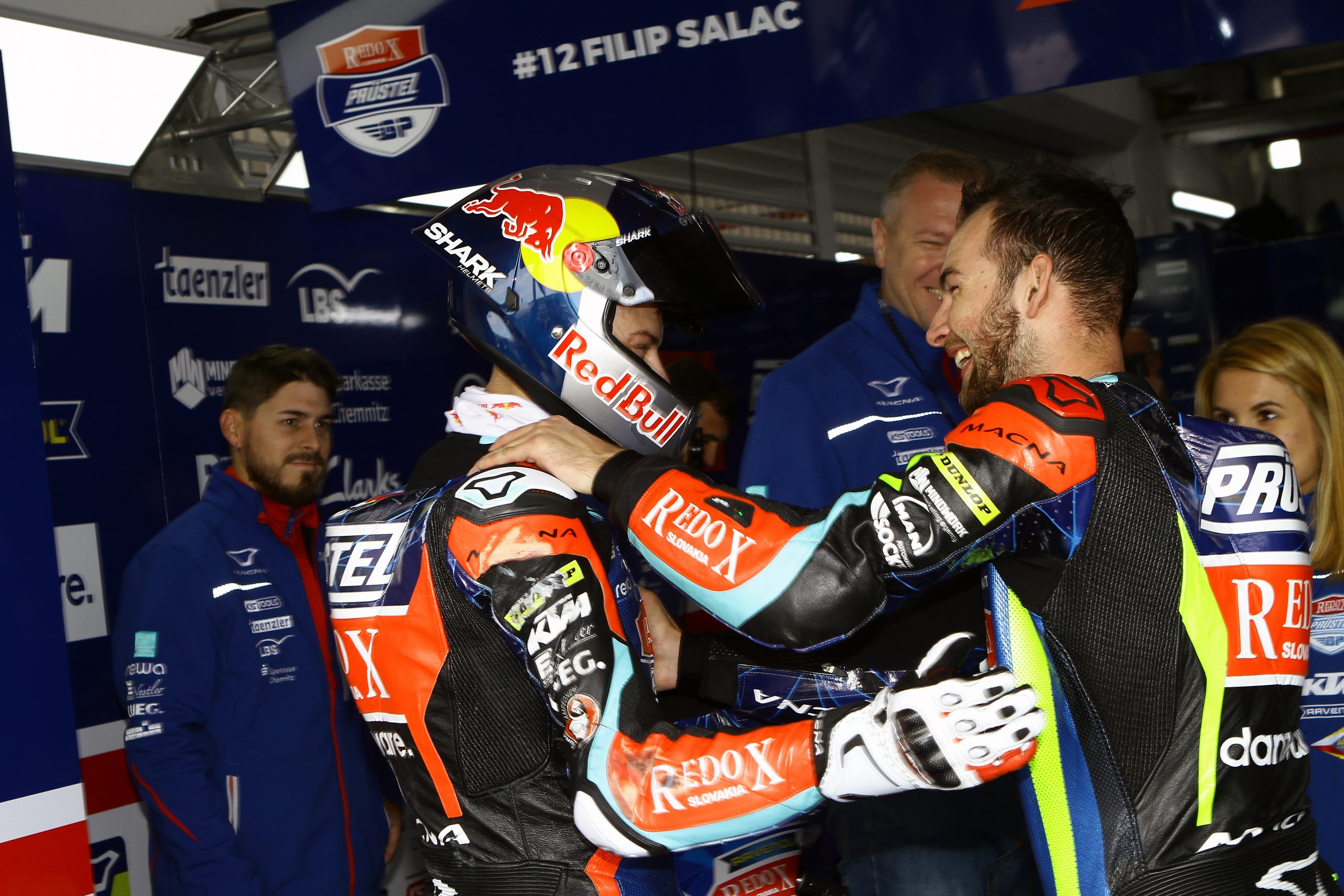 The last Moto3 race of the season couldn’t have been more nerve-racking. Countless crashes, a red flag, and then the battle for victory in the final Moto3 thriller of the year, involved no other than Redox PrüstelGP rookie Filip Salac.

It was an ordeal for the youngster Filip Salac on this cool and windy Sunday at the Ricardo Tormo circuit in Valencia. After the 17-year-old delivered a strong performance throughout the weekend, the season finale was all about making the next step, because for the first time in his career, the young Czech battled for victory in the Moto3 World Championship. Only a few minutes into the race, a mass crash lead to a red flag.  Filip Salac, however, kept his cool. The rider from near Prague has recently taken an incredible development, which was rewarded at the end of an eventful season with a fantastic fifth place and a total of 32 championship points as well as the 23rd place in the World Championship ranking.

Teammate and compatriot Jakub Kornfeil also had a reason to smile at the end of the weekend. In addition to his hard-earned Championship point, the Czech was also awarded with Dunlop’s “Forever Forward” trophy, which was hand to him on the basis of the most overtaking maneuvers this season. With a total of 78 championship points and the 14th place overall, the three-year chapter concludes between the oldest Moto3 rider and the Saxon team from the Sachsenring. Three years with many ups and downs. Nevertheless, the positive memories of the two podiums, a pole position, the almost victory in Assen this year and the countless spectacular duels, for which Jakub Kornfeil was now deservedly honored, outweigh the others.

The Redox PrüstelGP Team (11th in the Team World Championship 2019) will open a new chapter in just a few months. There will be some new faces in the young German Moto3 team, which will face the challenge with two rookies in 2020.

Today I really wanted to enjoy the last race of the season and with this team. The race before the red flag was really good. The soft rear tyre worked absolutely perfect in these conditions. I felt really comfortable but then after the red flag I wanted new tires but we only had the hard command. Still, I expected it to be very good but unfortunately, it wasn’t. I struggled a lot so finally, I am happy about P15 and one last championship point. I enjoyed the battles with Fenati and other riders but I just want to thank everyone for their continued support now. All the team, the sponsors for this amazing three years. We share many nice memories together and I learned a lot over the years. Next year I would like to keep improving myself. Big big thanks to everyone around the PruestelGP family, we have some great times to remember. I will now enjoy my free time in the winter and prepare for next season.

I am just super happy after this race. In warm-up, I felt that I had a really good pace with used tires. I was strong and so I knew I would be able to have a good race. I managed to get away pretty well from the start but soon the race was red-flagged. Of course, I wasn’t happy about it as you never know what happens after re-start. Luckily I had a start that was just as good and was straight back with the leading group that contained seven riders. Due to the battles, I almost lost the connection to the group but I pushed back in order to close the gap quickly. When I finally was in a good position to attach, it was already the last lap and I didn’t have 100% trust in my tyres anymore. It was a difficult race but P5 is my best result ever and I was so close to the podium. The whole weekend was good. I’d like to thank my team for their support this season. I surely learned a lot, some lessons were hard but it has been my pleasure to finish this season off in such a strong manner.

Filip did a good job all weekend and even today after the crash with the re-start he has kept his nerve. I am very happy about this success. Jakub had difficulties finding the right way all weekend. Before the race there was a technical problem, so we have to be satisfied with the 15th place and the one point. All in all, it was not an easy season, so I am all the more pleased about the great finale that Filip celebrated with us today. Every farewell is difficult and so we look back wistfully on the three years together with Jakub. The cooperation has always been fun, also with Filip in the one year. I would like to take this opportunity to thank them for the trust placed in us. I wish them all the best for their future. My thanks, of course, goes out to the entire team, who worked tirelessly and always with full commitment in the 19 races of the season. We will see a few people leaving here too whom I would like to wish the very best for their further journey. We are now slowly moving our focus to 2020, where a major challenge awaits us. We will start with two rookies, but first, we will enjoy our free time during the winter break to come back stronger.