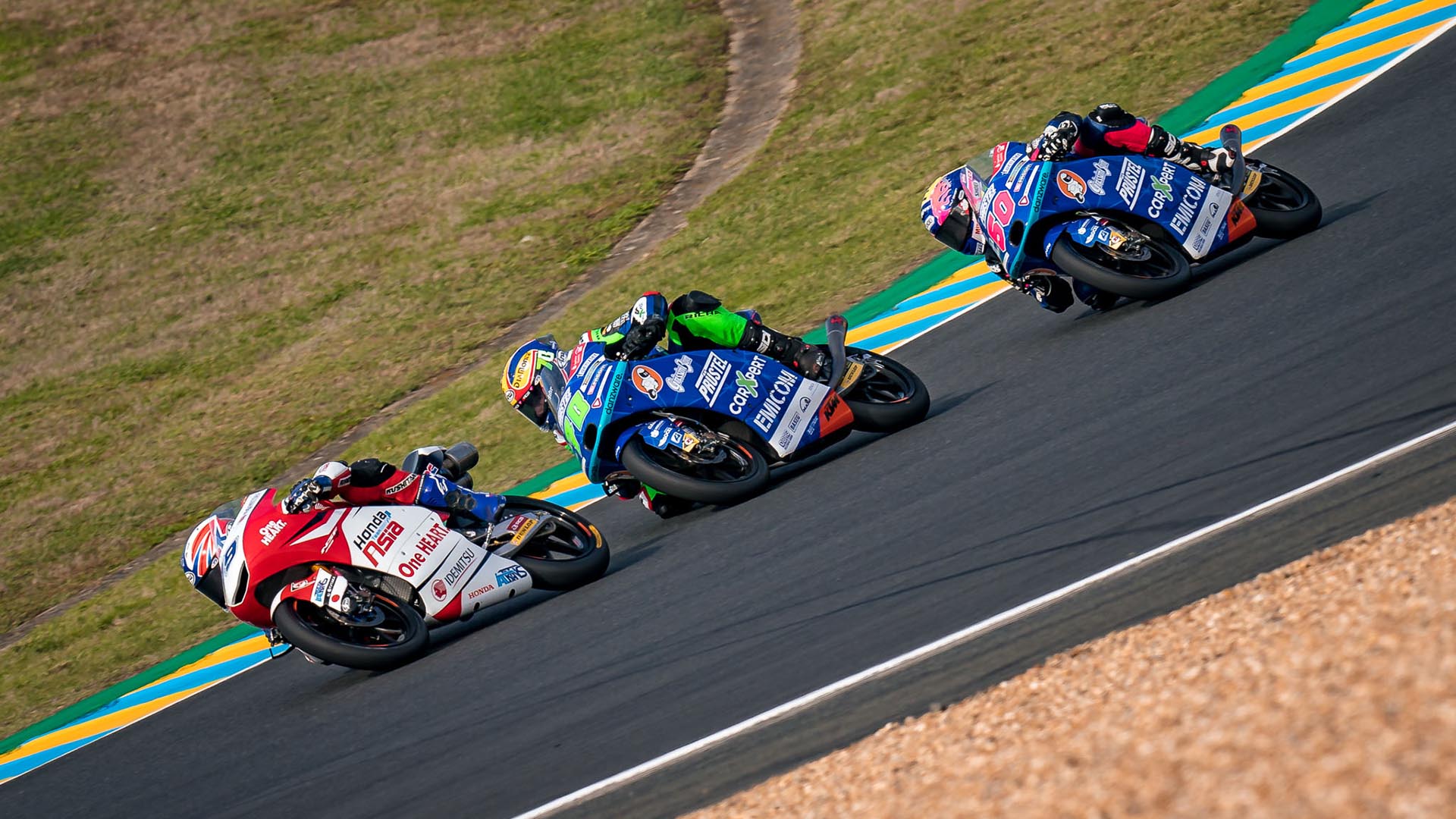 Carxpert PrüstelGP heads back on track for the first of three rounds in a row, scheduled in Le Mans (France) from 9th to 11th October. The historic track hosted the Shark Helmet Gran Prix de France, usually scheduled in May.

Barry Baltus and Jason Dupasquier arrived at the French track once again fully motivated to achieve their well-deserved points. On a wet practice session on Friday morning, both showed to have a good feeling in the rain. Unfortunately the mixed conditions of the afternoon didn´t allow them to repeat the good performance.

Saturday proved to be once again the weak point of Carxpert PrüstelGP, as none of the riders could get a fast lap in qualifying and had to start on the 29th place for Jason and 31st for Barry.

Once again the riders were called to a comeback race from the back of the grid. Barry Baltus was already 25th at the first lap, but then struggled to keep the pace with the group fighting for the points. Beside recover many positions, he was once again close to the points, but his 16th place was unfortunately not enough to accomplish the goal. Jason Dupasquier got his best seasonal result, finishing 17th but the Swiss rider suffered during the race and couldn´t express his potential.

No break for the team is planned, as they are flying immediately back to Spain for two races scheduled at Motorland Aragon on 18th and 25th October.

The start of the weekend was good, FP1 on the wet was really fine! Then in FP2 we struggled with slick tyres on a track with mixed conditions. Once again the qualifying was the worst part of the weekend, I couldn´t do my best. On the contrary, the warm-up was  very good. I was 6th and I enjoyed a lot. I start the race well, also in terms of feeling with the bike, which was almost perfect. But then I couldn’t stay with the group fighting in the top-15. I finished again 16th and it was a bit disappointing, but I am happy with my improvements. I want to thank the team for the great work they did. See you in Aragon!

The first of three race weekend in a row. We started on Friday with wet track on FP1, even if I crashed twice the feeling with the bike was good. FP2 was in tricky conditions as the race track was not totally dry, and I had some difficult. FP3 was dry and I didn´t have a great feeling as I couldn’t turn the bike quickly as I wanted, Then in qualifying we struggled a bit. The warm up of today was useful to me to improve in some braking points, in order to have more speed in the corners. I finished the race 17th which is my best seasonal result so far and I also got some good laptimes,, but I am not 100% satisfied. I will for sure take benefit of this weekend and we will improve further in Aragon. I want to thank all my team for the good job and to all those that support me.

Jason and Barry were again so close to the first points. Too bad that it didn’t work out again. They really deserved it. Sure we have to admit that our result was favored by the crashes in front of us. But that’s the way it is in racing – you have to finish to be classified. The conditions here in Le Mans were certainly not easy. And they did their job well. We have no choice but to stay focused and not lose sight of the finish.