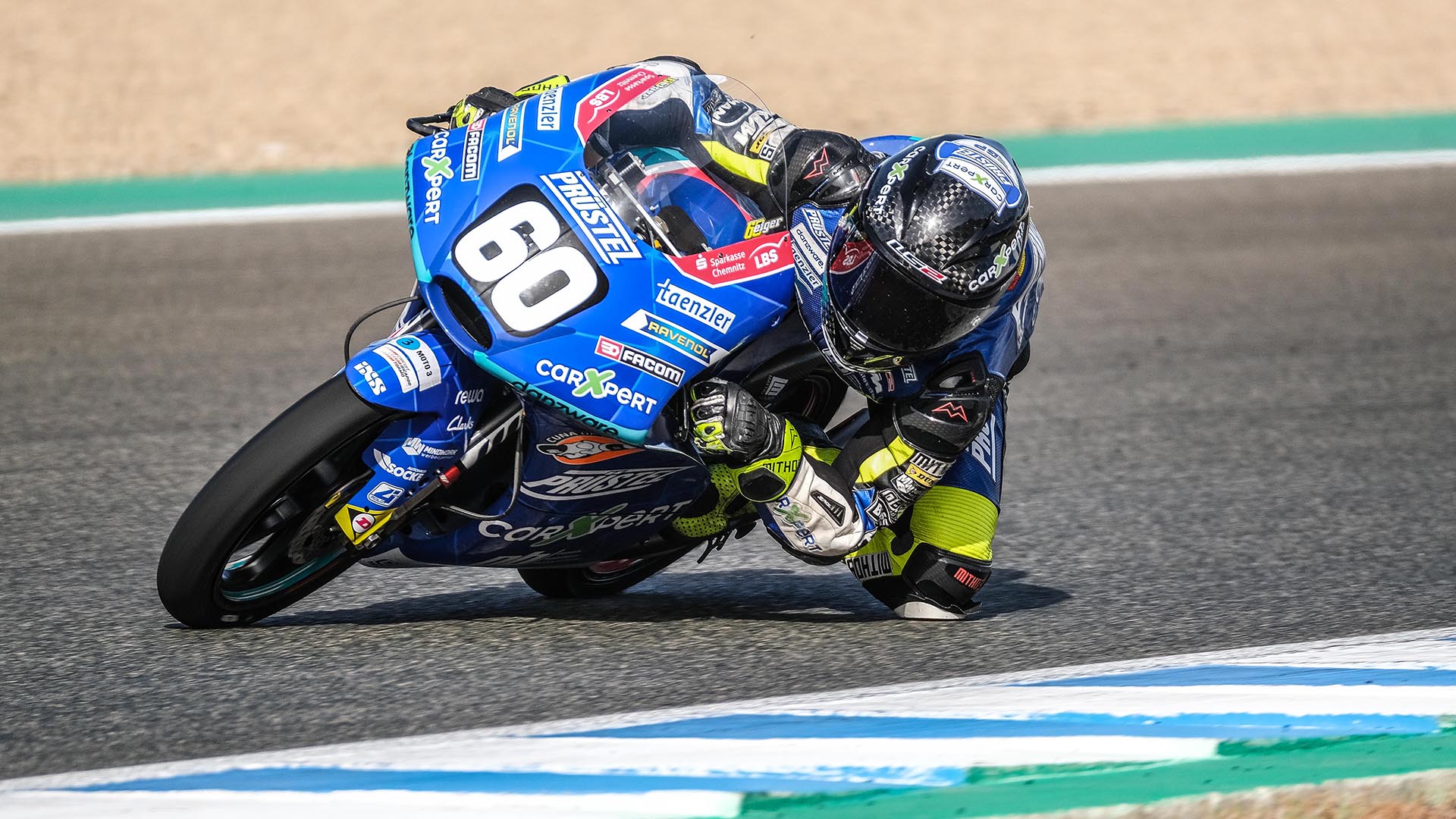 Weekend with three races for Dirk Geiger in Jerez

Only three weeks after he injured his collarbone, Dirk Geiger was back on track in Jerez

The Cuna de Campeones PrüstelGP rider Dirk Geiger went back on track in Jerez only a few weeks after he broke his collarbone. It might not be the best way to come back at races, as three races were scheduled in only two days.

After two days of free practice on Wednesday and Thursday, Dirk got a P26 as starting grid position in Saturday Qualifying. Even if the pain due to the injury was still present, the German rider managed to improve almost 2 seconds during the whole weekend.

Unfortunately in the first race, scheduled on Saturday at 1 Pm, Dirk was forced to retire after only 3 laps, due to a technical problem. But with two races left for the weekend, Dirk never lost the motivation to fight. Fighting against the pain to his collarbone, he managed to finish the two races of Sunday in 24th and 25th position.

Now the next round is planned for the first days of October at the Motorland Aragon (Spain). Once again three races will take place during the race weekend.

It was not my best weekend as it was really difficult, especially because of my recent injury to the collarbone. Free practice and qualifying were better compared to the previous races, but we still miss something to be more in front. Finally I managed to start from the 26th place of the starting grid. I started the first race very motivated, the start was really good and I recovered many positions. But I started to have problem with the engine, I felt the bike was getting slower and slower. After three laps I had to retire unfortunately. I was disappointed because I felt I could be competitive for the race. But the positive side was that, we still had two races to go. Luckily we were able to solve the problem. The second race, the first of Sunday, was not bad. I couldn´t stay with the fastest group but I had fun fighting in a smaller group with three other riders and I finished 24th. I am happy because I was faster than in the rest of the weekend. The last one was similar to the second one, fighting in a group for the whole time and I was able to finish 25th. I am not fully satisfied because I know I can do better. I am sure that in Aragon it will be better, I am already motivated and I know it will be much better also with the pain in my collarbone.

Dirk had a tough start of the weekend after the few weeks break and the injury that came with it, which takes some time to recover. The other competitors made 1.46, which meant a gap of more than 2 seconds. After Dirk´s engine broke down in race 1, he was able to finish race 2 and 3 on places 24th and 25th. His fastest lap of the whole weekend was a 1.48.471. Now we look forward to the next race in Aragon.